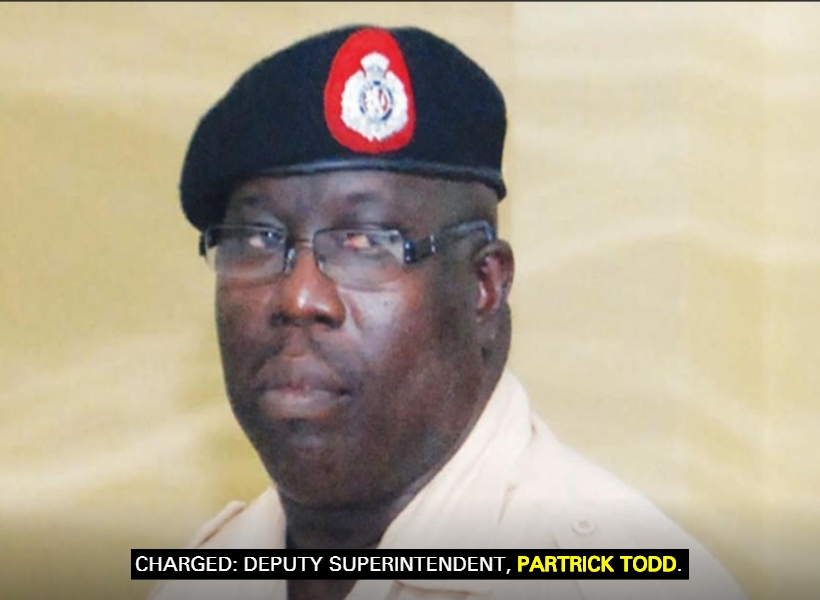 One month after an alleged drunken Deputy Superintendent of Police, Patrick Todd was involved in an accident which claimed the life a of 64-year-old pedal cyclist, he was this morning slapped with two charges.

The Officer appeared before Magistrate Russell Liverpool in the Leonora Magistrate’s Courts.

He was charged with causing death by dangerous driving and driving under the influence of alcohol.

It was further alleged that on the same day , Patrick Todd drove motor car PER 992 when his breath alcohol level was 70 micrograms.

The normal limit is 35 micrograms.

The cop, 53, denied both charges after they were read to him by the Magistrate.

The defendant was represented by Attorneys-at-Law Gordon Gillhuys and Dexter Todd.

Dexter Todd, in a successful bail application for his client, told the court that the incident is unfortunate and his client is a father of four.

According to the lawyer,  his client is expecting the birth of his fifth child soon.

Magistrate Liverpool released Patrick Todd on bail in the sum of $250,000.

The father of four was instructed to make his next court appearance on November 12, 2018 for report.

According to reports, on the day in question around 19:20hrs, the cop’s vehicle PTT 992 was proceeding east along the norther side of the bridge when he collided with the now deceased.

It was reported that Patrick Todd told investigating ranks that he  suddenly felt an impact, and upon investigating, saw Alleyne lying injured on the bridge.

Alleyne was then picked up and rushed to the Leonora Cottage Hospital in a semi-conscious state.

He was subsequently referred to the Georgetown Public Hospital, where he was pronounced dead on arrival.

A breathalyzer test was later conducted on  Patrick Todd, and  he was found to be above the legal alcohol limit.