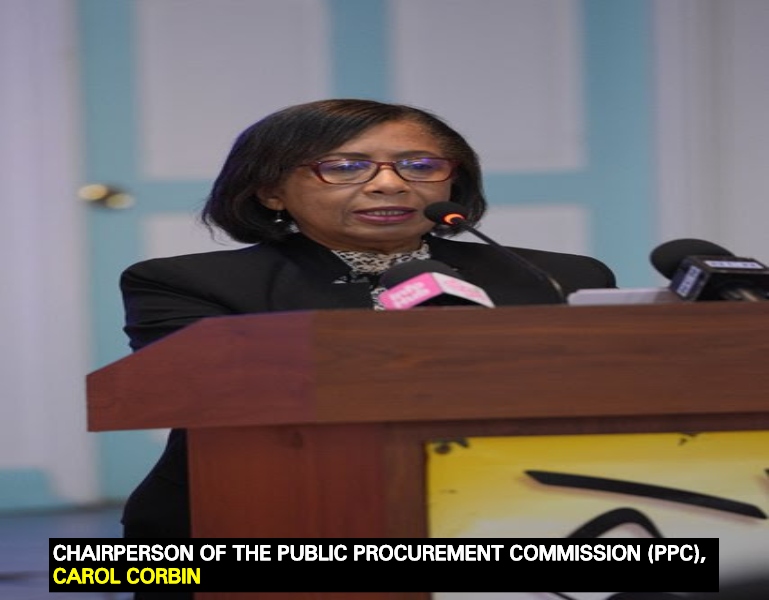 The Public Procurement Commission (PPC) has launched consultations to familiarise public authorities on proposed regulations which would make it easier to debar contractors who do substandard work.These sessions are aimed at introducing stakeholders to the Draft Debarment and Suspension Regulations and to obtain feedback on areas important to the effective functioning of the public procurement system, in keeping with the Public Procurement Act of 2003.

Addressing the gathering at today’s launch at the Regency Suites, Hadfield Street, Georgetown, Chairperson of the Public Procurement Commission (PPC), Carol Corbin explained that over the years, government officials had been complaining about delinquent contractors and the many problems experienced in the poor execution of government contracts.The Public Procurement Act, which deals with functions of the national board, states, “Pending the establishment of the Public Procurement Commission, the National Board shall be responsible for making regulations governing procurement to carry out the provisions of this Act,” and “adjudicating debarment proceedings,” Corbin added.She said, too, that while there are references in the Procurement Act to the suspension and debarment of errant contractors, the required regulations for the debarment process were not included and as such, “No action could have been taken over these years to actually debar or suspend contractors and suppliers, because the relevant supporting regulations do not exist at this time in terms of being approved and included in the legislation.”Guyana’s procurement entities are responsible for the management of over $110B. Therefore, PPC’s Chief Executive Officer, Seon Noel said, “Public procurement must, therefore, be viewed as a business endeavour, requiring actions to protect the public purse, and these actions can involve suspending or debarring individuals and companies who are not responsible enough in their relationships with public procurement entities and therefore being unable, temporary or otherwise, to do business with government.”Last year’s Auditor General’s report said that a consultancy firm was hired to draft regulations under the Procurement Act, outlining the procedures to be followed by the Public Procurement Commission or NPTAB, in adjudicating debarment proceedings. The firm examined and made recommendations on revisions to the regulations, with a view to increasing government’s threshold limits, in light of current prices and the fact that the last increase in limits was in November 2004.The National Procurement and Tender Administration Board provided a copy of the draft Debarment and Suspension Regulations to the commission for its review.  Once the process of consultations is completed, the draft document will be presented in the National Assembly.