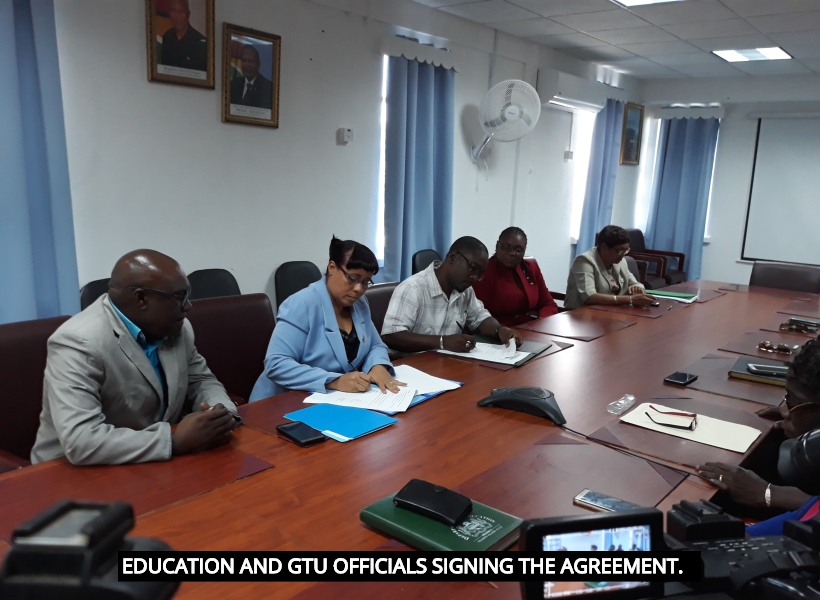 “It has been a long haul,” said President of the Guyana Teachers Union, Mr. Mark Lyte, after finally inking an agreement with the Ministry of Education which will see teachers being able to receive increases for a three-year period.

The agreement inked today will see teachers working for below $100,000 to receive 12 percent for the year 2016 while those working for more than $100,000 in the same year receiving eight percent.

According to the agreement too, the interim payment teachers received in 2016 along with other public servants will cover the increases for 2017 while all categories of teachers will received eight percent for this year.

Also teachers will receive a lump sum payment of $350 million covering the payment of debunching monies for the period 2011 – 2018.

From next year teachers will be received salary based on the respective debunching scales, the agreement states.

Signing the agreement on behalf of the Ministry of Education were Chief Education Officer, Mr. Marcel Hutson, and Permanent Secretary, Ms. Adele Clarke, while Lyte and GTU General Secretary, Ms. Coretta McDonald, signed for the union.

After signing the agreement, the GTU President noted that “Our teachers are going to benefit from outstanding clothing allowances, they will benefit from increases that date back to 2016.” He added, “We believe that all in all we have been able to arrive at a position that will bring some level of satisfaction to the members of the GTU and the teaching fraternity in Guyana.”

Reflecting on the journey to finally being able to sign an agreement, Lyte said “we were able to move away from where we were at the stage of thinking about arbitration to come back with the Ministry to sit and amicably resolve our differences and to arrive at a consensus in terms of our position.”

Meanwhile, Hutson not only called the signing of the agreement “symbolic” but went on to add, “what has happened here today is a testimony of what could happen if everybody decide we are going to compromise to come to positions where each other will develop an understanding of what we are about, we could move forward.”