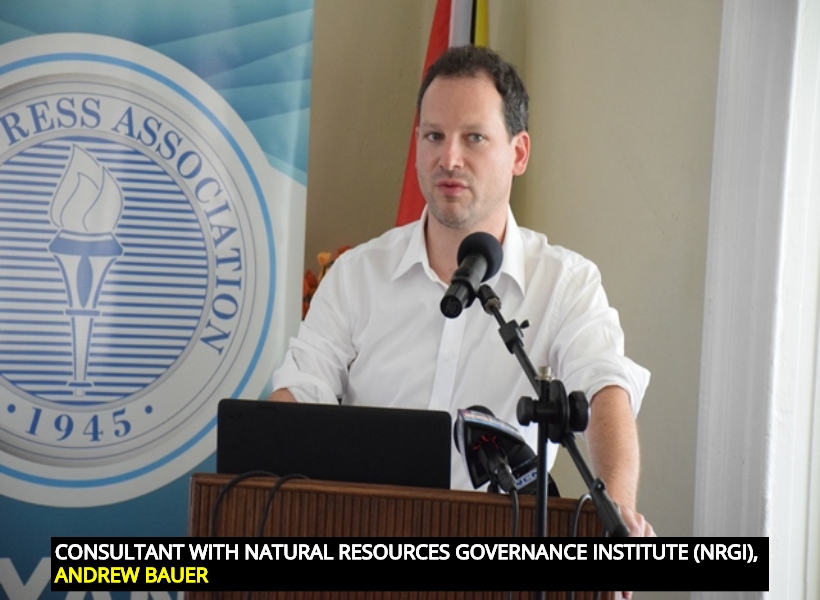 Guyana’s Green Paper on the establishment of the Natural Resource Fund (NRF) has some strong points. But there are also some fundamental areas of concern. This is according to economist and Sovereign Wealth Fund expert, Andrew Bauer. He has been a consultant with the Natural Resource Governance Institute (NRGI) for 15 years.

During a lunchtime engagement with members of the press today at Moray House, the NRGI consultant pointed out that the Government’s Green Paper has four key strengths. He said, “The Paper addresses the pre-source curse (increasing spending and borrowing in anticipation of windfall revenue from oil); the issue of volatility (managing money in anticipation of fluctuations of oil price on the world market); the Dutch disease (a phenomenon where other sectors cease to be competitive and while oil money becomes the main anchor of the economy); and saving a portion of the petroleum revenue for the next generation.”

Bauer noted however that there are fundamental areas in the Green Paper which must be addressed. He said that Guyana must improve its fiscal rules, its investment rules and ensure that there is consensus building.

The economist said that Guyana’s fiscal rule is just too complicated. He said that the government would be wise to ensure that it simplifies the rule so that the ordinary man can understand it. As it stands, Bauer explained that the fiscal rule envisioned by government sets out how much money should enter the budget and how much the government should deposit into the Fund. He said that the Fiscally Sustainable Amount Rule allows for a higher proportion of spending when oil production is modest and a lower proportion when production is very high.

Bauer said that there is also a weak provision for a cap which limits the amount of oil money that can be spent per budget. He said that the government proposes that it not be permitted to spend beyond 25 percent of non oil revenues, nor would it be allowed to spend more than what is deemed economically sustainable by the Macroeconomic Committee that it would establish.

Notwithstanding these positive aspects, the NRGI official said that there are areas for improvement. He said that the rules should be modified to better ensure fiscal sustainability and constrain borrowing. He said that the current rule allows for excessive discretion of the Macroeconomic Committee on what qualifies as an economically sustainable amount. He said, too, that there is no cap on the money government can borrow against non-oil revenues that it would be putting into the Fund. These include the moneys made from the forestry and gold sectors. Bauer said that the failure to improve the policy in this regard would not allow Guyana’s NRF to achieve its purpose.

As it relates to the Investment Rules, Bauer said that the Government must be wary of banks and other patrons that may bid to be the investor for the Fund. He insisted that there must be a transparent process in selecting the firm that will invest the nation’s NRF moneys overseas. He also cautioned that a thorough due diligence must be done on the chosen individual or firms.

With regard to consensus, the NRGI official said that this is critical to the success of the Fund. The economist insists that the political opposition and citizens at large must be consulted on the Fund and the rules that would be used to govern it. “Without it, you are risking the next party coming in just throwing it out the window. Then that party will put in place, what they are comfortable with and that is what you will have over and over again…So you need consensus.”

Overall, the NRGI said that the Ministry of Finance is working assiduously towards ensuring that there is transparency and accountability. He noted that it already has a “sturdy foundation” in the Green Paper to work with. “All it needs to do now, is correct those crucial deficiencies,” he concluded.