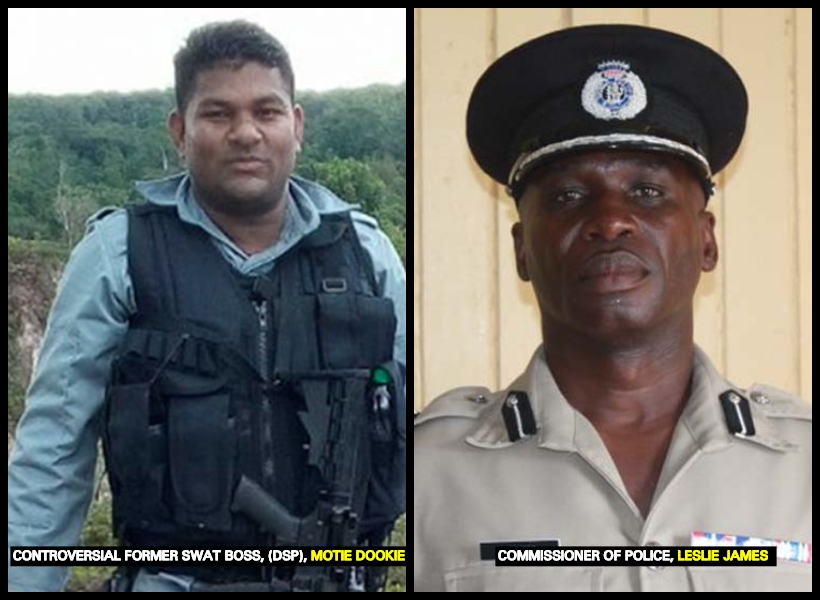 Commissioner of Police, Leslie James confirmed Dookie’s return to the force this morning during his first press conference with the media since taking office as Top Cop.

While James refused to say where Dookie has been placed, the Guyana Standard was reliably informed that the DSP was posted to the Force’s Control Room located at the Police’s Headquarters in Eve Leary, Georgetown.

There, Dookie is mandated to monitor all radio messages between Police Officers.

In May, last, a decision was made by David Ramnarine, who was acting as the Commissioner of Police to send the controversial officer on “Special Leave in the Public Interest.” The former SWAT boss had been accused of smuggling a large quantity of Johnny Walker whiskey.

However, Justice Fidella Corbin-Lincoln later squashed that decision made by Ramnarine. The DSP’s lawyer, Anil Nandlall said that the decision was unconstitutional, capricious, whimsical, irrational, based upon irrelevant and extraneous considerations, contrary to the rules of natural justice, unreasonable unlawful, null, void and of no effect.

The matter was subsequently taken to the Police Service Commission.

On December 30, 2017 Dookie was travelling in a minibus with the driver when the vehicle was stopped at a roadblock at Whim, Corentyne.

Before a search was carried out on the minibus, Dookie reportedly identified himself to ranks and informed them that he had one case of Johnny Walker whiskey in the vehicle. He claimed that he was taking the whiskey for an Old Year’s Night party in the city.

However, the head of the police patrol opted to search the vehicle and found more than the solitary case Dookie declared.

The former SWAT Commander and the driver were immediately placed under arrest. During the investigation, Dookie allegedly told ranks that knew nothing of the alcohol and had only begged the driver for a drop—after he initially claimed he only had one case of the whiskey in the vehicle.

The driver of the vehicle subsequently admitted ownership of the alcohol and departmental charges were recommended for Dookie.