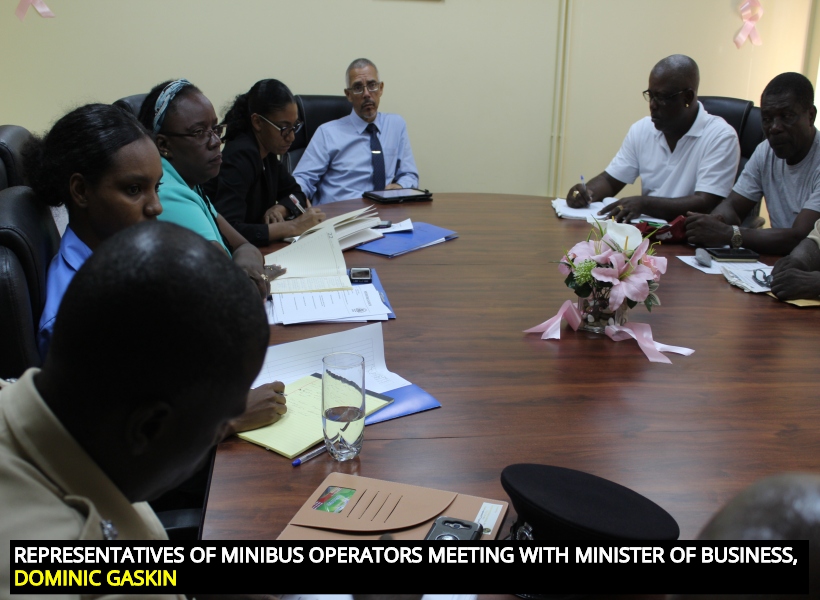 The adoption of a draft Code of Conduct for minibus operators is currently under consideration by the Ministry of Business. The Code of Conduct was brought to the attention of the Minister of Business, Dominic Gaskin during a meeting which saw the attendance of representatives of the United Minibus Union, among other stakeholders.

At the meeting key aspects of the proposed Code, which is intended to target minibus operators across the country, was brought to the attention of the Minister.

The Minister also heard of several concerns by commuters relating to the daily operation of minibuses. Minister Gaskin made it clear that it is important for the union, police and government to work together to address matters relating to operations in the country.

Highlighting grievances expressed by commuters, Ms. Muriel Tinnis, Director of the Consumer Affairs Department within the Ministry of Business, told those at the meeting that there continues to be complaints of speeding, touting and overloading of buses. She pointed out that one of the major complaints received was that of overcharging, particularly within routes.

There were also complaints that operators for certain routes charge passengers a higher fare at nights.

In response, Mr. Eon Andrews, President of the Mini Bus Union, said many of the concerns expressed by commuters are justified. He expressed optimism that the Code of Conduct will address the issue of touting and overloading. He added that it is important that the legal issues be separated from the commuter issues, since the Guyana Police Force is mandated to maintain the law, adding that many of the complaints are legal matters. The President recommended mandatory training for conductors, as well as colour coding for buses.

The idea of a code of conduct was supported by Mr. Dennis Chesney, President of the Berbice River Branch Mini Bus Owners Association. Chesney said his union has already implemented some aspects of the code and he hopes all operators will follow suit.

Superintendent Dennis Stephens, Deputy Traffic Chief, also attended the meeting. He underscored that the problem of touting persists because minibus drivers and conductors encourage it. He urged the operators to utilize the model used by the Berbice Association, which he said, has been very effective. Superintendent Stephens also pointed out that congestion continues to be a problem because of the large number of buses and the limited parking space available. The Code of Conduct addresses issues such as customer service, health and safety, licensing and compliance and the general operation of buses. The union will discuss the draft of the Code of Conduct presented by the Ministry with its membership and sign on once there is consensus.

Meanwhile, the Consumer Affairs Department is working on an implementation plan for the Code of conduct. The department is expected to continue to engage the Union on matters that arise.