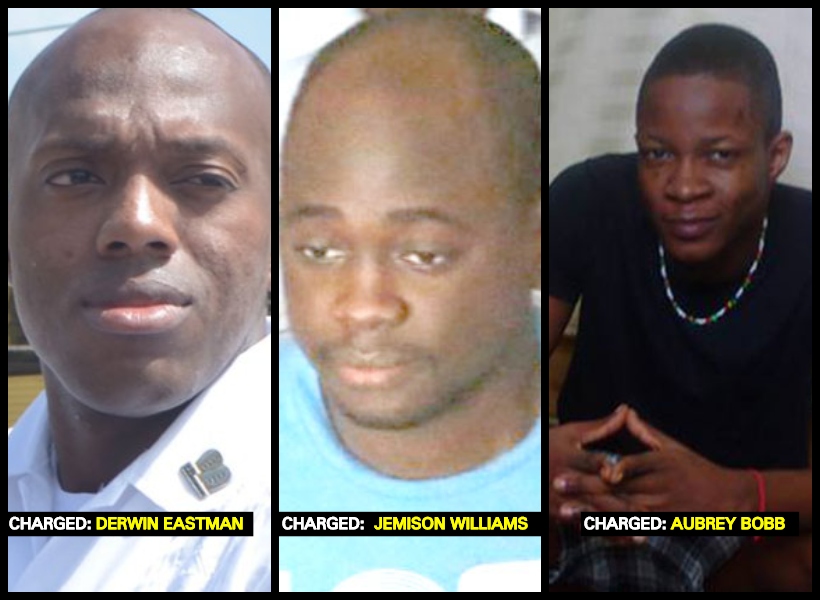 The main witness in the Preliminary inquiry (PI) into the murder of Godfrey Scipio, known as “Sagga” was this morning attacked by two former policemen who are charged with the crime.

Aubrey Bobb, 26, former Police Corporal Derwin Eastman and former Police Constable Jemison Williams are charged with the murder of Scipio who was shot and killed on October 12, 2017.

The trio are currently on remand.

This morning, when the matter was called in the Georgetown Magistrates’ Courts, Officers at the court handcuffed and shackled Bobb, the prosecution’s star witness, before escorting him in court to testify.

Bobb gave evidence against his two co accused, and was subjected to cross examination by Attorney at Law Nigel Hughes who is representing Eastman and Williams.

When the PI concluded, the three prisoners were escorted to the prisoner’s chute.

Soon after, persons at the court heard loud screaming and heavy banging emerging from the area.

A visibly upset Bobb began shouting, “ Like y’all wan kill me. How the f*#k y’all gone send them (Eastman and Williams) behind me.  Y’all know y’all suppose to wait till I reach in court then send them up.”

About ten minutes after, Bobb was sent back up through the chute and into the courtroom.

There, he told the Magistrate that Williams head butted him and Eastman stamped on him.

“We had an altercation and they beat me up. Look how them police set me up for them men to kill me,” Bobb added.

He then pointed out an officer to the Magistrate who he claimed witnessed the attack on him.

When the officer was questioned by the Magistrate, his story collaborated with that of Bobb story, hence the Magistrate order that an investigation be launched into the matter.

He told the court who provided the weapon and who was the driver of the get away vehicle when Scipio was shot and killed after leaving a hotel in Kitty, Georgetown.