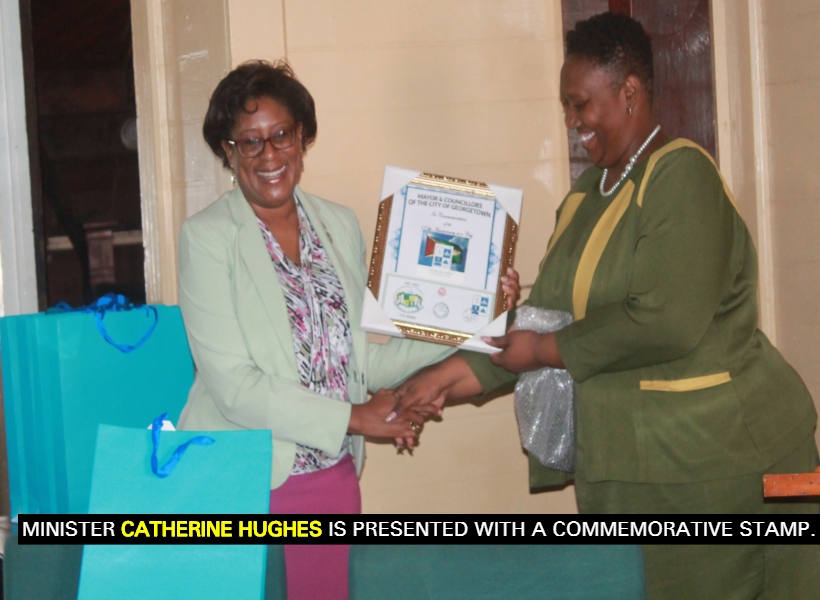 A commemorative stamp to mark 175 years of Georgetown’s elevation from the status of a town to a city has been unveiled by the Georgetown Mayor and City Council of Georgetown. It was on August 21, 1843 that Queen Victoria, by later Patent, declared the Colony a Bishop’s see (or jurisdiction).

Even as she considered that a number of activities have already been held to commemorate Georgetown 175 th anniversary, Minister Hughes recognized the capital city as the commercial and financial center of Guyana and the seat of government.

The Minister recalled that Georgetown began as a small town in the 18th Century, a period when the French, Dutch, Spanish and British fought among themselves for possession of newly discovered territories in the West Indies, South America, East Asia, and even Australia. She reminded the gathering that Georgetown was once called “The Garden City of the Caribbean”, and was a tourists’ attraction in the Caribbean because of its neatness, its cleanliness, the wide canals, double carriage-ways and nicely landscaped parapets. She, moreover, charged every citizen to play their part so that Georgetown can regain the name of the “Garden City of the Caribbean.”

Mayor of Georgetown, Chase-Greene, observed that the unveiled stamp depicts historical landmarks from old and new Georgetown and altogether represent the hallmark of development of the garden city in both its demographical, geographical changes and its expansion for advanced economic and social development. “Most importantly it represents our people, our culture and our heritage as a Capital city” said Mayor Greene.

The Mayor recalled that St. George’s Cathedral and the City of Georgetown clearly were designed to go hand in hand in the formation and substance of a successful city. She noted too that the Stabroek Market is another historical landmark in the city named by the Dutch and was formerly known as Long Champs by the French and was a part of the first settlement in the city of Georgetown. According to Mayor Greene, the Stabroek Market usually has a hub of activities and the Stabroek Square has its own significance as the place where African slaves were sold or punished.

The City Hall building on the other hand which was constructed in 1888 has stood the test of time although it is in dire need of immediate rehabilitation, the Mayor observed.