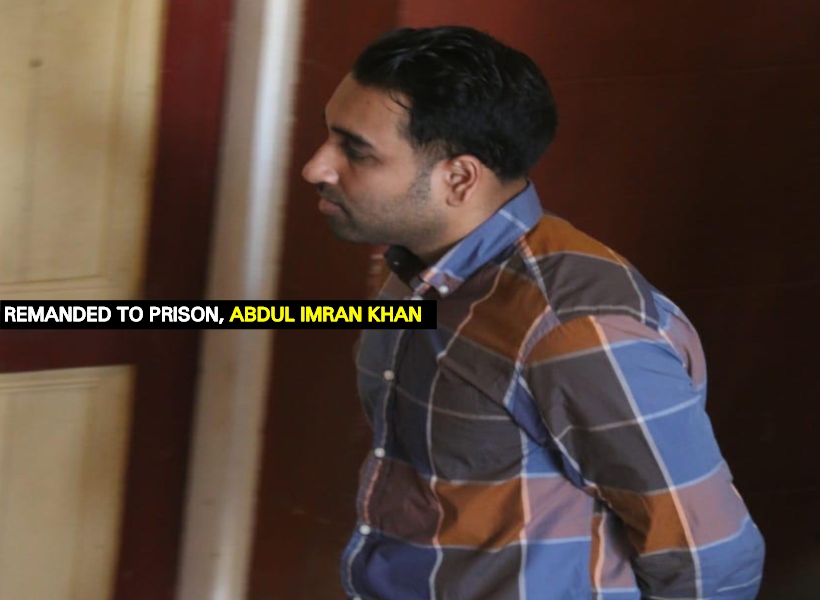 Days after Abdul Imran Khan was seen in a widely circulated video assaulting a disabled man outside of Palm Court, he was this morning charged and remanded to prison for the offence.

Khan, 31, of 11 Austin Street, Campbellville, appeared before Chief Magistrate Ann McLennan where an attempted murder charge was read to him.

It is alleged that on October 28, 2018, at Main Street, Georgetown, with intent to commit murder, he unlawfully and maliciously wounded Romario Balget, a man with a disability.

He was not allow to plead to the indictable charge after it was read to him in the Magistrates Courts.

Police Prosecutor, Simone Payne made objections to bail being granted to Khan citing the serious nature of the offence and the fact that the victim who is disabled is still hospitalized at a private institution.

Facts presented by the Prosecutor stated that on October 28, 2018, at 02:00 hrs Balget and some friends were leaving the night club when they were confronted by Khan who was standing at the gateway.

As a result, Balget walked between Khan and his friends and Khan became annoyed and dealt him several punches to his head and face causing him to fall to the ground.

The court heard that while on the ground, Khan took a glass bottle and slashed Balget on his right side face causing him to receive injuries.

He then continued to kick and cuff the victim while he was lying on the ground in an unconscious state.

Balget was then picked up and rushed to a private institution where he underwent surgery and remained as a patient.

Khan’s lawyer, Glen Hanoman, after listening to the Prosecution’s facts, told the court that “facts” is one sided.

He added that it is unclear what is the motive behind the police charging his client with attempted murder when it was a simple fight.

The Magistrate, after listening to the both sides, remanded Khan to Prison on the grounds of Public safety.

He was instructed to make his next court appearance on November 19, 2018.

Yesterday, Imran Khan’s, older brother Safraz Khan, appeared before a City Magistrate where he was charged for discharging a firearm outside Palm Court.

Safraz Khan pleaded not guilty to the charge which read that on October 28, 2018, at Main Street, Georgetown, he discharged a firearm in a public place.

Safraz Khan was charged after CCTV footage showed him firing several shots with his licensed firearm into the air outside Palm Court.