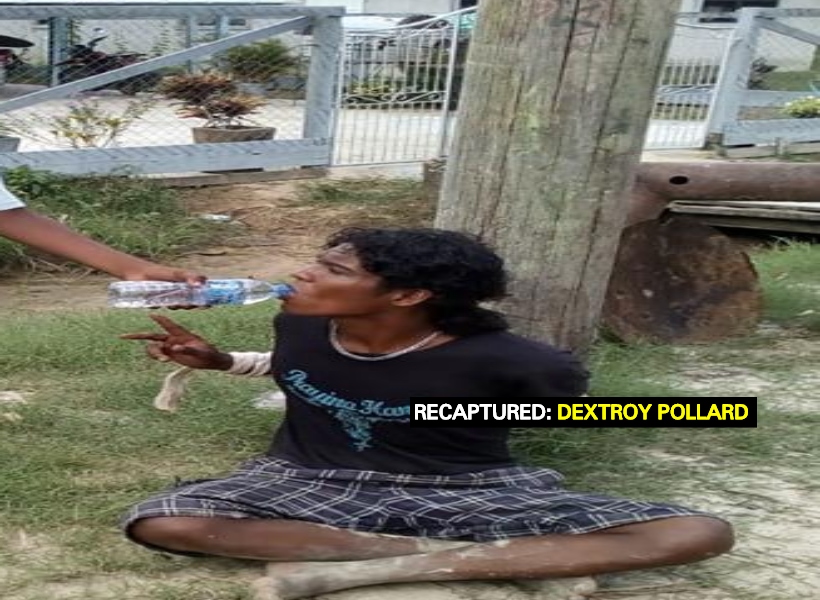 Dextroy Pollard, a break and enter and larceny suspect, who along with three others escaped from the Lusignan Prison on October, 15, last, was recaptured this afternoon. He was found sleeping under the bottom house of an abandoned house.

The 29-year-old suspect was captured by a resident in the village of Free and Easy on the West Bank of Demerara (WBD).

The Guyana Standard has been told that the escapee was wearing red lipstick at the time of his arrest. Female garments were also found in a plastic bag that was in his possession.

A police source revealed that the suspect claimed he had been staying at the abandoned property since escaping from the prison and would go out at nights dressed as a woman so no one would recognize him.

When the resident went into the yard, Pollard had been sleeping in, the civilian along with other residents nabbed the sleeping escapee.

Now that Pollard has been recaptured, ranks are tasked with locating the last escapee, 23-year-old Sudesh Dyal, a break and enter and larceny suspect.

On October 18, last, Travis Evans, a murder suspect, and one of the escapees were the first to be recaptured. Travis was captured by ranks from the Joint Services at the Linden/Soesdyke junction and taken to the Camp Street Prison.

The three men escaped from the Lusignan Prison around 04:30 hrs on October 15, last, by scaling a fence. Their escape was recorded on a surveillance camera.