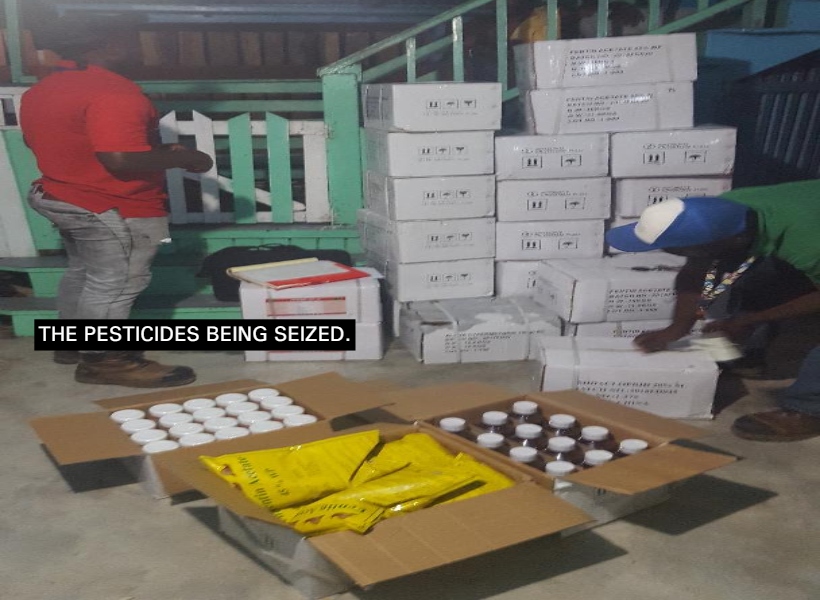 Inspection and Enforcement Officers of the Pesticides and Toxic Chemicals Control Board (PTCCB), in collaboration with the Guyana Police Force, yesterday thwarted a major smuggling operation and confiscating approximately 300 kilograms of illegal or unregistered pesticides.

The operation which took place at approximately 23:00hrs, saw inspectors of the authority along with officers of the Guyana Police Force, descending on the home of Mr. Veerasammy Armogan of Crabwood Creek Backland, Grant 1779 Corentyne, Berbice where the illegal pesticides were found among other contraband items.

According to officials from PTCCB, the confiscated products are regarded as highly hazardous pesticides and pose significant risks to human health, agricultural production, economic trade and the environment.

Registrar of the PTCCB, Mrs. Trecia Garnath said that the Board strongly condemns acts of this nature given the major health and environmental impacts these chemicals pose. “The global trade in counterfeit and illegal pesticides is growing. With increasing quantities of fake and illegal pesticides being produced, marketed and sold by organized criminal groups around the world, there are greater risks to the safety of handlers, farmers, consumers and the environment,” Mrs. Garnath said.

Legal proceedings have commenced against Mr. Armogan for the possession of illegal/unregistered pesticides with intent to distribute, sell or use. The PTCCB is also currently investigating further intelligence gathered to curb the illegal trade of counterfeit pesticides into Guyana.

Counterfeit and illegal products are neither tested nor evaluated and are not subjected to the legislative regulatory process for pesticides. These products often contain chemicals

which are either banned or restricted due to the risk they pose to human health and/or the environment.

In an effort to ensure sound chemicals management in Guyana and keeping with the PTCCB’s mandate to eliminate the importation, sale and use of illegal pesticides while reducing the availability of these unwanted products, PTCCB will continue to collaborate with law enforcement personnel to carry out its operations to confiscate and safely dispose of counterfeit or illegal pesticides countrywide.