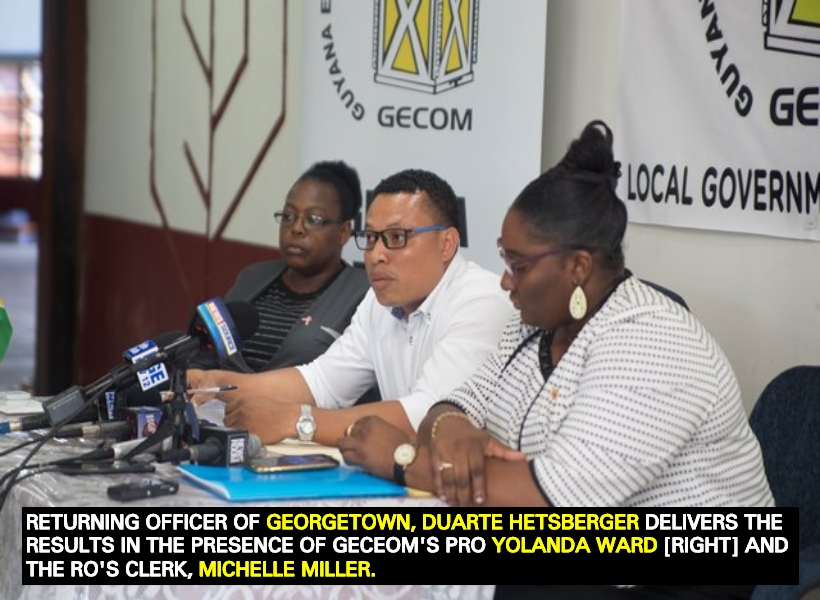 In spite of a low turnout at the Local Government Elections, A Partnership for National Unity (APNU) was still able to win 21 seats on the Georgetown Mayor and City Council. The APNU’s coalition partner, the Alliance For Change (AFC) only secured two seats while the People’s Progressive Party (PPP) moved up from three to seven seats.
The results were announced earlier today by Returning Officer, Duarte Hetsberger at the Critchlow Labour College. Hetsberger noted that over 119,000 persons were registered to vote but the turnout for the elections was only 28.3 percent which works out to 28,868 votes being cast. The Returning Officer noted that the votes were tallied under two systems – Proportional Representation and First Past the Post.
Under the Proportion Representation system, APNU gained 18,127, the PPP gained 7, 050 and the AFC gained 3, 059.
Further to this, it was revealed by the Returning Officer that the incumbent Mayor, Patricia Chase-Green, won her constituency – Constituency 12 – and polled the single largest number of votes of all constituencies with a total of 2212 votes.
Even with this record performance, Public Health Minister, Volda Lawrence, who is also the Chairwoman of the People’s National Congress (PNC), told the media today that her party is not ready to say if it will push for Chase-Green to be returned as Mayor. She noted however that, “All Georgetown would be pleased with whoever is elected Mayor when the new Council meets.”
In the meantime, Opposition Leader, Bharrat Jagdeo held a press conference today where he stated that the additional seats earned on the Council will be used to push for more accountability. The former Head of State noted that the PPP Councillors will be calling for audited statements annually, for the National Procurement and Tender Administration Board to be used for the award of contracts, for the Council’s website to be more user-friendly, and for the review of expenditure on city projects. He also noted that if the Parking Meter issue comes up again, his representatives will be voting against it.
See below for more details on the winners for the 15 constituencies.