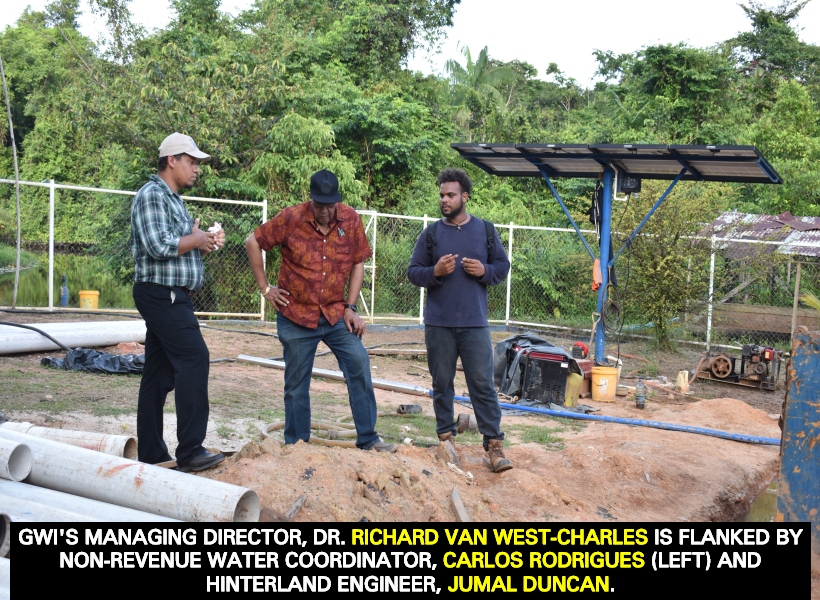 The completion of the ongoing upgrade works at the Port Kaituma Water Supply System has been marred by a number of factors that existed over 15 years ago.  This includes an unstable power supply and an inaccurate pipe network design, which has contributed to numerous leaks.

Managing Director, Dr. Richard Van West-Charles and a team of senior technical officials visited the Region One community on Friday, November 9 to assess the progress of works undertaken to date.

He was informed that the existing distribution system which exists in an undulating terrain has a lot of its mains exposed to the surface of the road. It was also noted that flush-out valves were none-existent in some sections of the network.

According to him, a technical team from Georgetown is currently in the community to undertake corrective works to the distribution network, which includes making the necessary interconnections and reorganizing the entire distribution system.  Over 80 leaks were discovered, with 20 of those being major ones. They are in the process of repairing those leaks and installing flush-out and air valves, so as to facilitate an improved quality and level of service to residents.

Additionally, works are underway for the development of a new well that was recently drilled in the compound of the Citrus Grove pump station. It was drilled at the required depth of 210 feet. The contractor attached to this project is Chowramootoo Construction Service.

GWI’s aim is to provide a daily water supply to residents of Port Kaituma and to phase out sectionalizing. Currently sections of the community are receiving water two days per week. However, this is dependent on a sufficient power supply from Kaituma Power Inc. and the reconfiguration of the distribution network.

Moreover, plans are also underway to reduce the usage of the river water as the main source of supply and instead utilize additional groundwater sources. The residents of Port Kaituma have been provided with surface water from the Port Kaituma River for over 15 years, which is at risk of contamination by mining and agricultural activities. Recently, the water from the river was contaminated with high levels of mercury.  However, several subsequent tests were conducted and revealed that the level of the mercury decreased significantly to 0.000033 mg/l which is within acceptable levels.