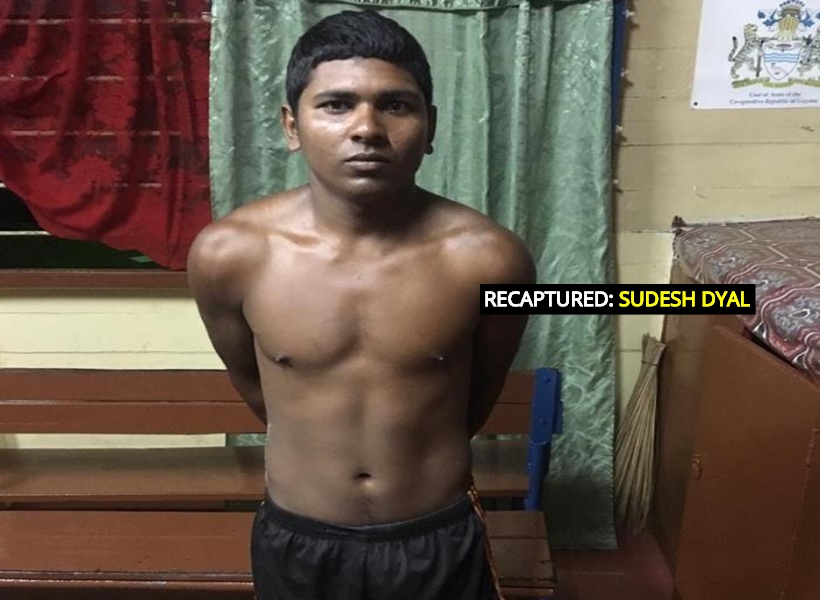 Lusignan Prison escapee, 23-year-old Sudesh Dyal was recaptured early this morning at Tuschen Squatting Area, West Coast Demerara (WCD). This is more than a month after escaping from the facility with three other inmates.

The break and enter and larceny suspect was the last escapee to be rearrested. According to information received, police ranks obtained information that the 23-year-old was living in a house at the aforementioned location.

Ranks swooped down at the location around 03:00 hrs this morning and arrested him. He was still in his bed at the time.

It was Dyal; another break and enter and larceny suspect, Destroy Pollard, 29; and murder suspect, Travis Evans who escaped from the Lusignan Prison on October 15, last, by scaling a fence when the prison guards were sleeping.

Evans was the first escapee to be recaptured. He was held on October 18, last, by ranks from the Joint Services at the Linden/Soesdyke junction and taken to the Camp Street Prison where he remains.

Pollard, on the other hand, was nabbed by a resident in the village of Free and Easy on the West Bank of Demerara (WBD) and handed over to the police. At the time of his arrest, he was wearing red lipstick as a disguise. Female garments were also found in a plastic bag that was in his possession.