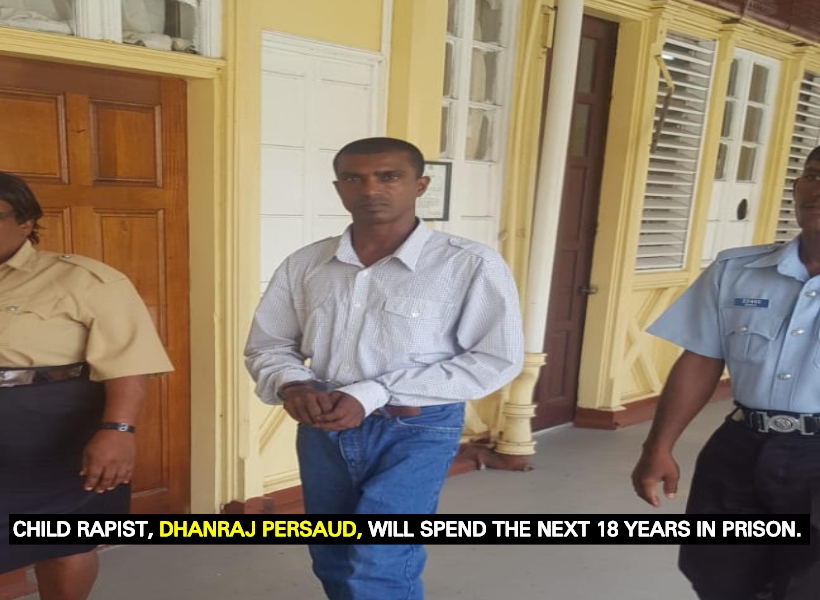 38-year-old caretaker Dhanraj Persaud will have to spend the next 18 years behind bars after being convicted for the rape of a 15-year-old girl.

The custodial sentence was handed down by Justice Jo Ann Barlow this morning at the Georgetown High Court, about two weeks after Persaud was found guilty by a jury.

On October 23, 2013, in the county of Demerara, Persaud engaged in sexual penetration with the minor.
According to a probation officer, Persaud admitted to being sexually involved with the underage girl. The probation officer said that Persaud claimed he was misled by the minor who had told him she was 17 at the time of the sexual act.

However, through a statement read in court by a counsellor, the victim expressed that she feels sad about what happened to her. The counsellor relayed that the victim is still in a state of shock and disbelief and would sometimes think about killing herself to get away from the nightmare.

“All of my dreams have been shattered. I always wanted to leave home as a virgin bride,” the victim said through the counsellor. The victim also expressed a desire to have Persaud punished for what he had done to her.
Apart from the jail sentence, the Judge ordered that Persaud utilise programs available for sexual offenders during his time of incarceration.

The case for the State was presented by Prosecutors Tiffini Lyken, Seeta Bishundial and Abigail Gibbs. Persaud was represented by Attorney-at-Law Maxwell McKay.