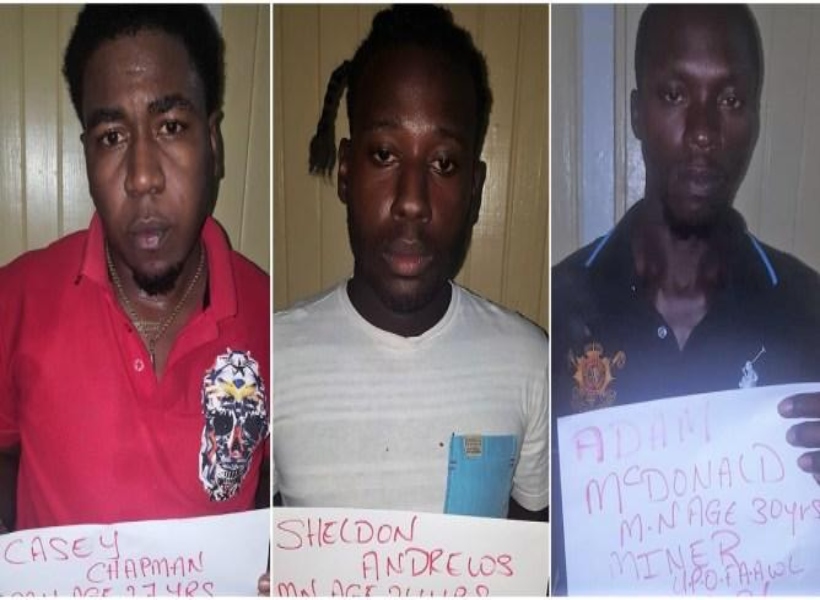 Three men, who police were staking out after receiving information that they had trailed a businesswoman from the Ogle Airport and shot at her vehicle, were this afternoon slapped with four charges.

The first charge read that on November 26,2018, at High and Princess Streets, Georgetown, while being in company of each other, the had in their possession one .32 Taurus pistol without being holders of firearm licenses.

The second charge stated that on the same day and at the same location, the men had in their possession one 9 mm Glock pistol without being holders of firearm licenses.

It was further alleged that on the same day and at the same location they had in their possession 12 live rounds of 9 mm ammunition without being holders of firearm licenses.

The third charge stated that on the same day and at the same location, the men had in their possession seven .32 ammunition when they were not licensed firearm holders.

The men all pleaded not guilty to the charges after they were read to them by Chief Magistrate Ann McLennan.

Chapman was separately slapped with a robbery under-arms charge.

He denied the charge which read that on July 5,2017, at Grove, Access Road,East Bank Demerara, while being in the company of another and armed with a gun, he robbed Marcia Maria Martin of a quantity of articles and cash, totaling $1.4 M.

Police Prosecutor, Simone Payne opposed to bail being granted to the defendants on the grounds of the serious nature of the offences and the fact that two weapons were discovered in the vehicle.

Facts presented to the court stated that on the November 26,2018, police received information that three men were in a vehicle trailing a businesswoman from the Ogle airport.

As a result, road blocks were set up.

The court heard that ranks from the Ruimveldt Police Station were on the look out at High and Princess Street, when they observed three men sitting in a vehicle acting suspiciously.

The ranks then approached the vehicle where they identified themselves as officers. A search was conducted in the vehicle and they found the articles mentioned in the charges. The men were all arrested and taken into custody.

In relation to the robbery matter involving Chapman, the Prosecutor told the court that an identification parade was held on Wednesday and Chapman was positively identified by the victim.

The Magistrate released the men on $200,000 bail each.  However, she remanded Chapman to prison on the robbery under-arms charge.

The men were instructed to make their next court appearance on December 12, 2018.