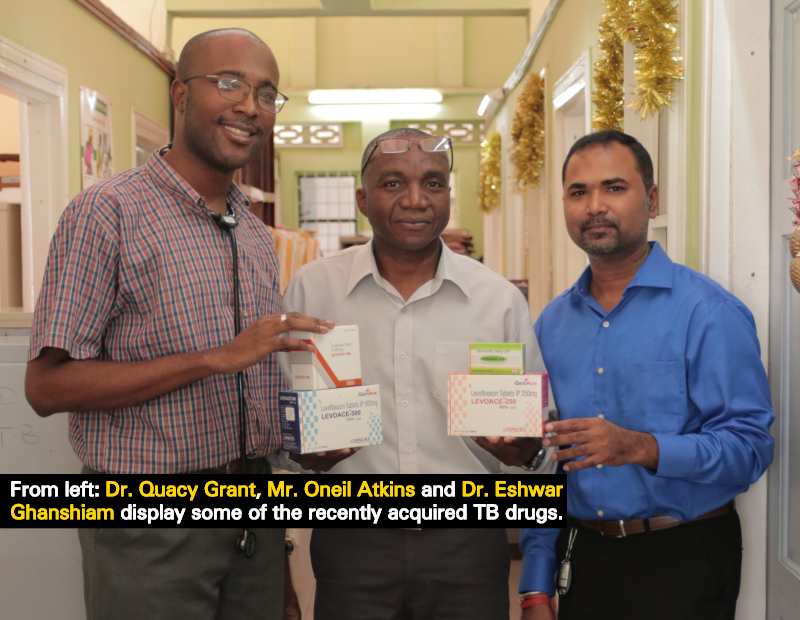 Although recently faced with a shortage of tuberculosis (TB) medication, the Ministry of Public Health has assured that there is currently no cause for alarm.

Emergency measures were put in place to address this shortcoming which saw a lack of Ethionamide, one of the four medications, used to treat drug-resistant TB.

According to Director of Pharmacy, Mr. Oneil Atkins, “All TB patients would be adequately treated.”

Emergency supplies of this key drug arrived in Guyana this week and were distributed to patients, Dr. Jeetendra Mohanlall, Manager of the National TB Programme, has confirmed.

The supply of medication will be enough to treat all drug-resistant TB patients for another year, he disclosed.

Explaining the recent shortage, Dr. Mohanlall said the National TB Programme has been pushing for quality second line medication for Guyana’s drug resistant TB patients but due to some global challenges the delivery was delayed. The programme, as a result, had to resort to emergency supplies which arrived later than the expected time of delivery.

“This is the first time in four years that we had a brief interruption of one of the medications for patients,” he revealed.

But the National TB Programme has made great strides in the programmatic management of the multi-drug resistant TB (MDR-TB). He said there is a dedicated Focal Point Person, Dr. Eshwar Ghanshiam, even as he pointed out that Guyana has implemented nine of the 10 recommendations by PAHO/WHO’s Green Light Committee given in 2016.

He pointed to increased screening in Guyana to identify all possible drug resistant TB patients, noting that while there were 150 screenings in 2014, this figure jumped to 1,540 in 2017,

Dr. Mohanlall noted too that of the 2015 cohort of drug-resistant TB patients, 40 percent successfully completed the two-year treatment. This figure climbed to 60 percent in 2016.

The 2017 cohort of DR-TB patients are continuing treatment.

Other strides in the sector include improving the management of patients. “With this accomplishment, there needs to be more dedicated resources in the Direct Treatment Observe Short-course (DOTS) programme to do daily visits to patients,” Dr. Mohanlall said, pointing out that “Even doctors attached to the TB Programme visit patients in their homes with the mobile teams that are established.”

He disclosed that TB patients generally have socio-economic challenges and they need psycho-social support in their management. To strengthen his position, the National TB Programme Manager is strongly advocating for the social protection of these patients which, he said, “is in line with the END TB Strategy”.

Although Guyana has a ninety percent coverage of DOTS, there are still many challenges presented by defaulting patients such as drug addicts, the homeless and the internal migrant population such as miners and loggers.

In 2017 it was observed that a fifth (20 per cent) of the TB patients also habitually abuse drugs and alcohol.

“These can be difficult to manage under the DOTS strategy and there are some who need to be in specialised care facilities such as TB Step Down Care Unit set to be commissioned in the first quarter of 2019,” Mohanlall said.