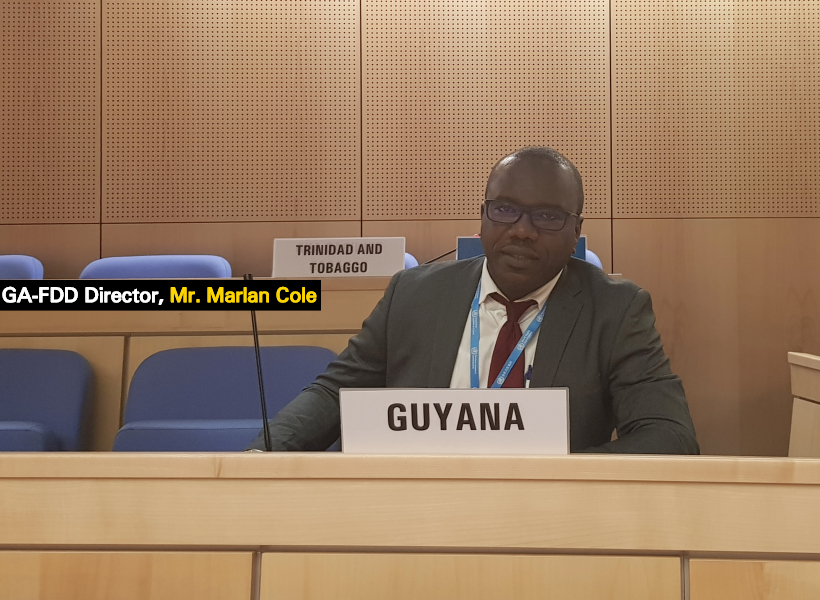 While the magnitude of the presence of fake medical products on the local market is currently unknown, Guyana is looking to bolster its efforts to reduce the prevalence of this daunting state of affairs through its recent attendance of a strategic meeting.

To advance its fake drugs detection efforts, the Government Analyst Food and Drug Department [GA-FDD] participated in the 7th Meeting of Member State Mechanism on SF medical products, which was hosted at the Head Quarters of the World Health Organization [WHO] in Geneva-Switzerland. The forum, which spanned the period November 27 to 30, 2018, was attended by Director of the GA-FDD, Mr. Marlan Cole. Cole’s participation was made possible through key and critical support from the Public Health Ministry.

This problem is one that has been highlighted in a Study of the Public Health and Socioeconomic Impact of SF medical products published by WHO in 2017 and reports received by the WHO’s Global Surveillance Monitoring System (GSMS) for SF medical products, a surveillance system that was launched in July 2013.

According to the Study, one in 10 or 10.5 percent of medical products sampled was deemed fake and when the estimated market value of US$300 billion in middle and low-income countries is factored against the 10.5 percent, it equates to over US$30 billion in cost to these countries. In addition, the University of Edinburgh developed an Impact Model for WHO, which was used to estimate the impact of SF antibiotic for the treatment of childhood pneumonia in Sub-Saharan Africa. The model revealed that as much as 72,430 excess deaths can be attributed to SF antibiotic with reduced antibiotic activity and 169,271 of excess deaths to fake antibiotics with no antibiotic activity.

Currently, Guyana’s first line of defence against fake medical products is enshrined in the Food and Drug Act Chapter 34:04 and its accompanying Regulations, particularly Regulation 78. This therefore means that registration and authorization of drugs are required based on the reliance (full assessment) for efficacy, quality, and safety by one or more of the following countries: the US, the UK, Canada or Australia.

However, in the recent past, an additional pathway for registration was created when the Public Health Ministry and the GA-FDD signed a Memorandum of Understanding (MoU) with the Caribbean Regulatory System (CRS) for assistance with medical products registration. This was in an effort to ensure fake medical products do not enter the health care system and that of the region.

Moreover, the GA-FDD has been faced with, and has also simultaneously, advanced litigation regarding the sale, release, registration, and distribution of medical products that are not registered or wish to be registered.  “In this regard and in our effort to protect the Guyanese consumers from SF medical products, the department has received key and critical support from the Ministry of Public Health and the Attorney General Chambers [AG] with matters before the courts,” said Ms. Tandeka Barton, Director Food and Drug Department (ag).

But the GA-FDD could not realize some level of success on its own, as such Barton expressed appreciation for astute leadership from the Public Health Ministry as part of the efforts to combat the existing problem with public health and economic implications. She is convinced that through exposure and alliances forged, Guyana will be in a better position “to double our efforts to prevent, detect and respond to Substandard and falsified-SF medical products in our health care delivery system.