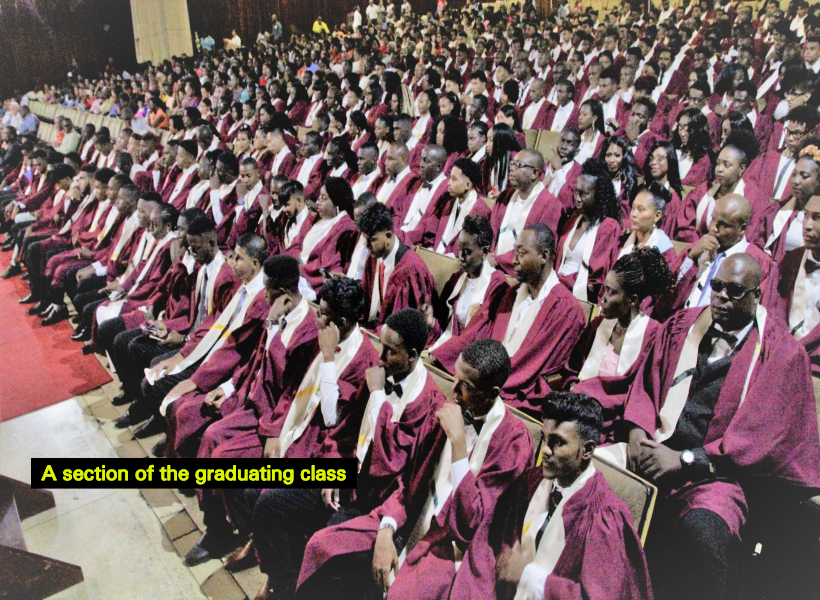 According to Crandon-Duncan, this year the Mechanical Department gained a 92 percent pass rate while the Business Department was judged the most improved.

During her presentation the Principal revealed that two GTI students have been the recipients of National Awards at the Guyana Technical Education Examination among the Technical Institutes for outstanding performances. The honoured students are Ms. Aaliyah Noble who completed the Ordinary Diploma in Commerce programme and Mr. Shurlun Tudor who completed the Technician Diploma in Building and Civil Engineering.

The Principal disclosed too that the fifth batch of level one and two trainees in Competency Based Education (CBE) programmes have graduated. As such, those trainees are now deemed competent after demonstrating their proficiency in the respective units of competency.

She said that 282 of these trainees were assessed and each will be awarded by the Council for Technical and Vocational Education and Training (CTVET) with the Caribbean Vocational Qualification (CVQ).

The Principal added that through the industrial attachment programme, during the months of June and July of this year, 85 companies welcomed staff and students into their spaces and exposed them to the rudiments of industry practices.

Crandon revealed that staffers of the institution have continued to benefit from training opportunities and healthy relationships have been forged with industry partners.

Presenting the feature address at the graduation ceremony was Director of the National Centre for Education Resource Development (NCERD), Mrs. Jennifer Cumberbatch. She told the graduates that they are the generation that will take the technology of today into new dimensions while solving environmental problems.

She advised the graduates that their contributions to society will be determined by how they follow their dreams and challenged them to follow their quest for knowledge as education does not stop after graduation day. “You can do anything that you put your mind to,” Cumberbatch assured even as she encouraged the students to reach beyond existing boundaries.

Chairman of GTI and the Guyana Industrial Training Centre Board of Governors, Mr. Vincent Alexander, pointed out to the graduates that not only can they now display their certification but they can also showcase their maturity when they become part of the global job market spread across various industries.

Noting that Guyana is on the cusp of becoming an oil and gas producing nation, Alexander urged the students to take advantage of the new sector to help develop Guyana. He, however, advised that the development which is pursued must be done in a sustainable manner which takes Guyana beyond the oil and gas movement it is about to experience.