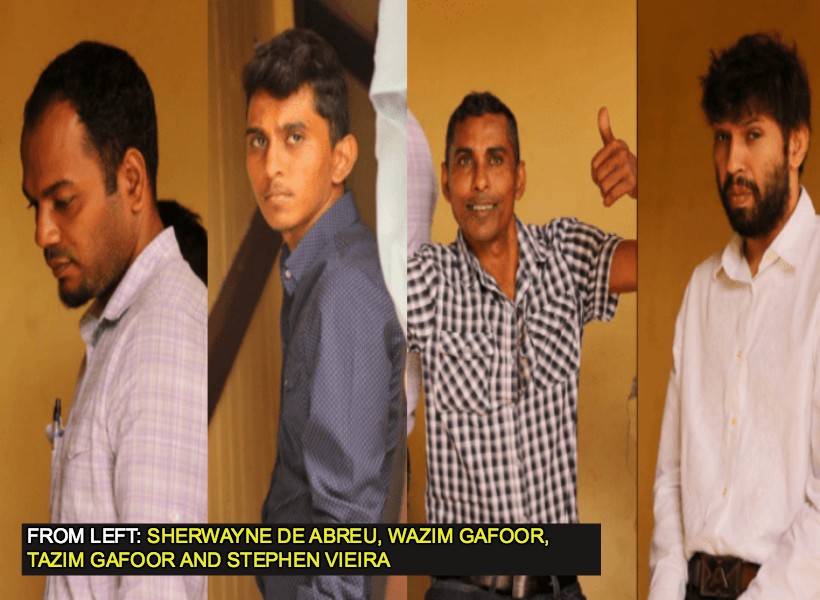 “I have no knowledge of any drug or narcotics being placed in any wood,” were the words of super biker, Stephen Vieira, when he was called upon by the court this afternoon to give his unsworn testimony into the $550M cocaine in lumber bust.

Vieira of Middle Street, South Cummingsburg, Georgetown, is accused, along with others, of aiding Hakim Mohamed to traffic just over 187 pounds (84.986 kilograms) of cocaine, hidden away in lumber. Nazim Gafoor and his father Tazim Gafoor, both of Menzies Street, Windsor Forest, West Coast Demerara, and former Customs Officer, Sherwayne De Abreu of 262 Street-Eight Section ‘A’ Liliendaal, Greater Georgetown, are also accused of aiding the cocaine trafficking.

It is alleged that between March 1 and May 2, 2017 at a sawmill belonging to Narine Lall, located at Lookout, East Bank Essequibo, the four men aided Hakim Mohamed to traffic 84.986 kilograms of cocaine. The men are on trial at the Leonora Magistrates’ Courts before Magistrate Rushelle Liverpool.

In his testimony, Vieira, who is being represented by attorney-at-law Latchmie Rahamat, declared that he has “absolutely” no knowledge of any plan to help Mohamed or Lall to export cocaine in lumber.

Vieira added that Lall hired him to help prepare paperwork to facilitate the export of lumber, and that it had nothing to do with narcotics. In fact, he said, “I would have never accepted employment if this was told to me. I must state that all paperwork was never filled out by me but by Hakim Mohamed.”

According to the defendant, he never packed or prepared wood for shipment and that, on the day of inspection, he visited the wharf with an inspector. He said that Mohamed brought the wood which was inspected in his presence and nothing was found to be in same.

“Hakim Mohammed told the inspectors that the other truck had a mechanical problem and the inspection was called off.  I left and I went home. I don’t know where the second wood was coming from. I don’t know who packed it. The only [set] of wood I saw that day was the one Hakim Mohamed brought to the wharf and same was inspected in my presence,” Vieira concluded.

The four men were arrested and charged in May 2017 after CANU ranks conducted a raid at the sawmill; the cocaine was found concealed in dressed lumber. An arrest warrant has been issued for Lall.

Although the men are accused of aiding Mohamed to traffic the narcotics, charges were never brought against Mohamed as he had struck a deal and testified on behalf of the State.

After careful revision of the evidence, Magistrate Liverpool ruled that prima facie evidence was led against the four men, and that the court would call upon each of them to lead a defence.