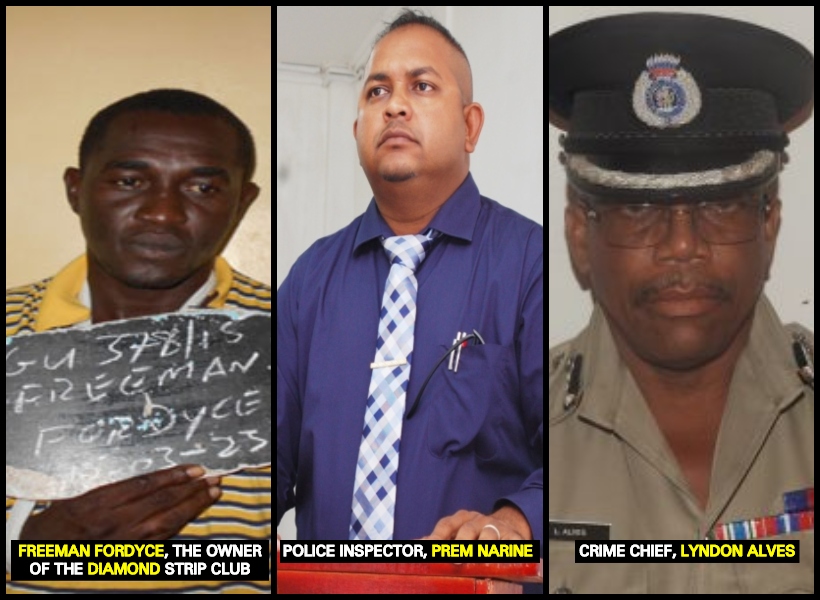 On Wednesday, ‘A’ Division Commander, Marlon Chapman indicated that the owner of Diamond Strip Club, Freeman Fordyce, would be charged the following day for assaulting Inspector Prem Narine in November last.

When the businessman was not charged yesterday, the Commander was contacted for a follow-up. In a telephone interview, Chapman said, “I cannot tell you anything.” He further explained that he would not know when persons are charged since his ranks would usually deal with court matters.

However, the very Commander said on Wednesday that the businessman will be charged the following day—that should have been yesterday. When reminded of this, Chapman said, “I remembered. Sometimes I would get information before or after persons are charged.”

The Commander still could not provide an update on this case. Acting Crime Chief, Michael Kingston had indicated that he had sent the file to the Brickdam Police Station for action to be taken.

The Inspector was assaulted on November 10, last. It is unclear why it is taking the Guyana Police Force so long to charge the businessman when Linden resident, Kerwin Eswick, was charged two days after biting a policeman.

More than a month ago, the Inspector along with other policemen went to search the club after four Venezuelan women complained that the businessman seized their passports and threatened to kill them and their families if they refused to work at the club as prostitutes.

This revelation came to light when two of the entertainers escaped from the club. It was their statements that led ranks to carry out the raid. During the search, however, Fordyce punched the Inspector to the neck. The officer subsequently pulled out his gun to keep the attacker at bay.

The entire ordeal was recorded on a surveillance camera. According to a source, the Police’s Legal Advisor, Justice Claudette Singh subsequently recommended that the businessman be charged assault, disorderly behaviour and riotous behaviour.

No charges were recommended for the Inspector since Justice Singh stated that his actions were justified. The file with the following recommendations was returned to the office of the Crime Chief since November, 22 last.

To date, the businessman has not been charged.

He then took her to a house in Alberttown, Georgetown where he and another man kept her for some time. And, in June 2015, he was again charged for the alleged kidnapping and attempting to murder Devon Chung on June 26, 2015, at D’Urban Street and Vlissengen Road.