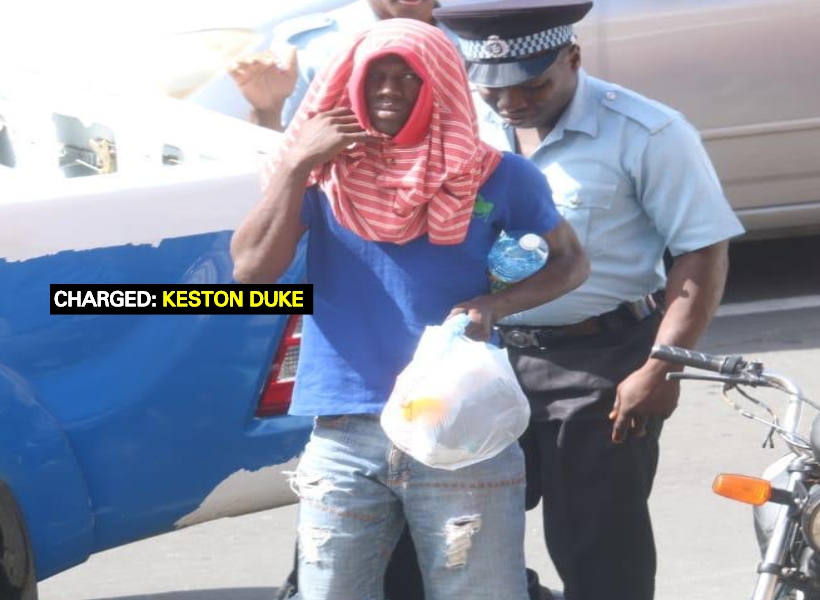 Days after a serving member of the Guyana Police Force (GPF) was viciously attacked by a group of young men at a night club, a technician was this morning charged and remanded for the act.

Duke is accused of disarming and wounding a police officer who was at the time performing undercover duties at the Aces’ Night Club.

It is alleged that on December 15, 2018, at Second Street Alberttown, Georgetown, Duke, while being in the company of others and armed with a gun, robbed Julius Bowlin of one gold chain worth $21,000, along with a pistol and six matching rounds worth $125,000, property of the Guyana Police Force.

It was further alleged that on the same day and at the same location, Duke while being in the company of others, unlawfully and maliciously wounded Bowlin.

An unrepresented Duke was not required to plead to the charges after they were read to him in the Georgetown Magistrates’ Courts.

Facts presented by Police Prosecutor Gordon Mansfield stated that on December 15, 2018, the police rank was performing intelligence duties at the night club when he was attacked by Duke and others who relieved him of his service firearm and six matching rounds.

The court heard that soon after Bowlin was relieved of the items he was assaulted by a group of men.

An injured Bowlin was rushed to the Georgetown Public Hospital where he is currently nursing a broken limb among other injuries.

The Prosecutor went on to tell the court that it was only recently that someone made an anonymous call directing officers to a garbage bin from where the said the gun was recovered.

Mansfield made serious objections to bail being granted to Duke, citing the serious nature of the offence and the penalty the charge attracts.

The Magistrate after listening to the Prosecutor’s facts remanded Duke to prison until January 4, 2019.