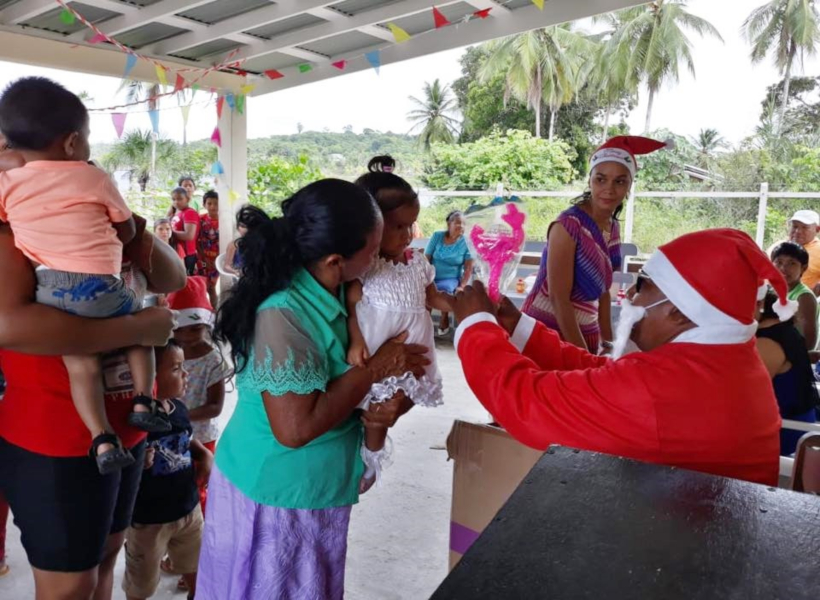 Children of the Essequibo Coast have been having a fun-filled Christmas season thanks to the spreading of early Christmas cheer by the Guyana Foundation.

During the past week, the Guyana Foundation has been feting children.

It was an occasion which saw the Sunrise Center coming alive with a children’s Christmas party which saw over 200 children being treated to a fun-filled time.

Guyana Foundation Trustee, Mrs. Che Jian Ping, who travelled to the Essequibo Coast for the event, was present to hand out gifts and entertain the children who were afforded transportation to and fro from areas such as Adventure to Affiance just to be included in the festivities.

The children were served snacks and drinks along with goodies from the New Thriving Restaurant and had fun participating in games, singing of carols, and dancing.

Yet another children’s Christmas party was held at the Mashabo’s Health Centre, an Amerindian village across the Ituribisi Lake on the Essequibo Coast.

Despite inclement weather, there were over 100 children in attendance who were entertained and received Christmas gifts and party bags for the holidays.

The children at the Health Center had their faces painted and enjoyed games such as pinning the tail on the donkey, throwing the ball through the clown’s mouth, among others. Each child was rewarded with confectioneries for their attempts.

Gifts were distributed by Pliston Charles, Deputy Toshao of Mashabo Village, who played the role of Santa Claus.

Great support and assistance to ensure this party was a success came from a number of persons within Region Two who commended the Guyana Foundation for spearheading the first such initiative. Even as they expressed hope that it will become an annual feature in the Region, regional officials commended Mrs. Supriya Singh-Bodden, Trustees and staff of the Guyana Foundation.