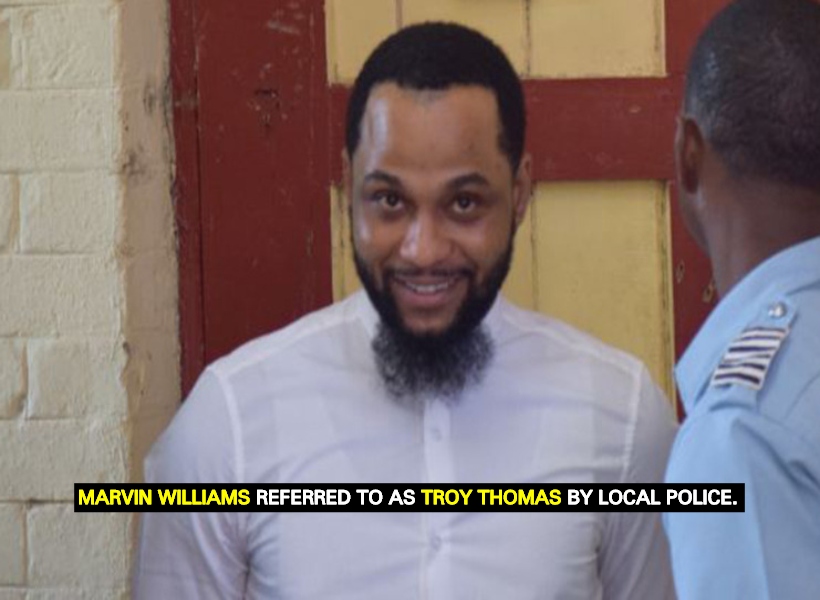 Despite being ordered to be extradited from Guyana a month ago, the US murder suspect identified locally as Troy Anthony Thomas is still in here in Guyana and will soon appear again in court to challenge his confinement as “illegal”.

Thomas, who maintains that his name is in fact Marvin Williams, is scheduled to appear before Chief Justice Roxanne George on January 11, 2019 in Habeas Corpus ad subjiciendum proceedings.

The writ of Habeas Corpus ad subjiciendum filed by lawyers for Thomas, who is in prison, seeks to challenge the authority of the prison to hold him. And now that a hearing is granted Thomas is arguing that his confinement is illegal.

In court documents seen by the Guyana Standard, Thomas’ lawyers have argued that, among others things, their client is being unlawfully detained and subjected to legal process unsupported by any legal basis or foundation.

The lawyers contend that Justice Jo Ann Barlow, before whom a challenge to the Extradition Treaty was mounted, made an erroneous ruling that Thomas’ protective rights were not violated. On June 15, 2018, Justice Barlow ruled that the Magistrates’ Courts had jurisdiction to hear the extradition proceedings.

The judge had further ruled that there is an extradition treaty between the United States of America and Guyana. She had noted that the Extradition Act of 1870 to 1935 and the 1931 Treaty were incorporated into domestic legislation in Guyana.

In a sworn affidavit, Thomas says, “I am advised by my attorney-at-law and verily believe that the treaty which was entered into between the United Kingdom and the United States of America on December 22, 1931, when Guyana was a colony of the United Kingdom, was never incorporated into the domestic laws of Guyana.”

And further, “In light of the decision of Justice Barlow, the learned magistrate was constrained to arrive at only one finding which is to issue the order for extradition. The effect of the ruling, erroneous as it is, was to remove from the learned magistrate the possibility of arriving at any other decision and consequently eroded the right of Marvin Williams [Troy Thomas] to a fair trial.”

According to Thomas’ lawyers, Magistrate Isaacs-Marcus did not possess the powers to rule on the issue of fair trial and that the issue can only be heard by a court of competent jurisdiction.

Referencing a recent decision handed down by the Caribbean Court of Justice (CCJ) in the case of McEwan and others v Attorney General, also known as the “cross dressing challenge”, the lawyers have further argued that the issue of separation of powers were raised by them in the challenge before Justice Barlow.

Williams contends that the proceedings purporting to be extradition proceedings that were conducted by Magistrate Isaacs-Marcus were beyond her legal power or authority, null, void, and without legal basis for reason that there is no law which empowers her to act in the manner she did.

“I fear that there is a real danger that I will be wrongfully extradited. I fear that if I am extradited I may be further extradited to a third State by the United States of America,” Williams [Thomas] said in the affidavit.

The murder suspect maintains that he is in fact Marvin Williams and that Justice Barlow also erroneously made the ruling that Marvin Williams was Troy Thomas. However, Magistrate Isaacs-Marcus had ruled that she believed he is Troy Thomas, a name he had always answered to in court.

Nevertheless, the US murder suspect says that he is a Guyanese citizen and is entitled to protection under the Constitution of Guyana. The murder suspect further said that was arrested on March 14, 2018 at Liliendaal, Greater Georgetown on a warrant issued by the Chief Magistrate. He said that even then, he denied being Troy Thomas.

Back in the United States of America, he is wanted for second degree murder, and two counts of criminal possession of a weapon in the second degree. It is alleged that Williams murdered 20-year-old Keith Frank, who was also a Guyanese citizen, on December 11, 2011. US police had issued a wanted bulletin for the murder suspect since 2012.

Frank, a father of one, who moved from Guyana to the US when he was 12, was shot and killed outside a Richmond Hill, New York party after running into some other men with whom he had an ongoing “beef.” It was reported that Thomas fled to the Canada hours after allegedly committing the crime.

Although Magistrate Isaacs-Marcus ordered on November 30, 2018 that Thomas be extradited, he remains in custody of the state until Minister of Public Security Khemraj Ramjattan signs off on the documents.