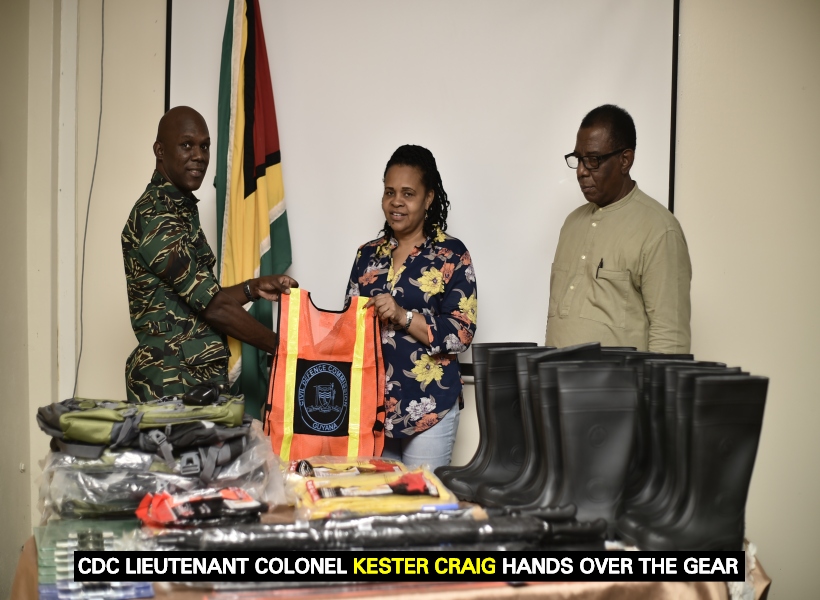 The Civil Defence Commission (CDC) today handed over a quantity of gear to the Regional Democratic Councils (RDC) of Demerara- Mahaica (Region Four) and Mahaica- Berbice (Region Five) as it continues its efforts to boost disaster response management nationwide.

Director General (ag) of the CDC, Lieutenant Colonel Kester Craig, said the CDC earlier this year trained several persons from both Regions Four and Five in the area of Damage Assessment and Needs Analysis (DANA).

As such, it is expected that with the provision of the gear and tools the trainees would be in a better position to put their new knowledge to use.

“The whole aim is to have them respond to any incident and gather information, which helps the Commission to make informed decisions. So today we want to hand over the tools and equipment that are necessary to carry out these functions. Once this equipment has been handed over, we expect that if anything happens, your team can go out and do the damage assessments,” Craig said as he handed the equipment over to Region Four’s Regional Executive Officer (REO), Ms. Pauline Lucas, and the Region’s Vice-Chairman, Mr. Earl Lambert.

The Director General (ag) said too that the Commission remains committed to building Guyana’s disaster risk management capabilities through stakeholder engagements and, as such, will be working to complete the Regional Risk Assessment Report and Regional Multi-Hazard Preparedness and Response Plan for Region Four by the first quarter of 2019.

“This is in an effort to build resilience at the regional level so as to reduce disaster risk through enhanced preparedness and response capabilities. The completion of the plan will give the Region the independence to manage its own disaster planning and resilience and will help to guide how every unit, every agency that falls within the region would be able to respond to any disaster or emergency,” he said.

Meanwhile, Ms. Lucas thanked the CDC for the items while assuring that it will be properly utilised when the need arises.

“We would like to thank the CDC for this kind gesture and it will be used for the enhancement of efforts in responding to any disaster. We will use it to ensure that we are ready and equipped to respond to any disaster,” she said.

Mr. Lambert, like Ms. Lucas, expressed gratitude to the CDC and noted that for a country that is below sea level, preparedness and response are key elements in tackling disasters.

“I would like to thank the CDC. We are below sea level and as such, we have to be prepared in times for disaster. We have some areas that we must pay attention to because during the rainy season, we have villages that suffer from overtopping among other issues. I know that the CDC from time to time would call on us to find out what’s happening in the various areas and now you are responding in a way to prepare our people so that if there is any disaster, they are prepared to respond,” he said.