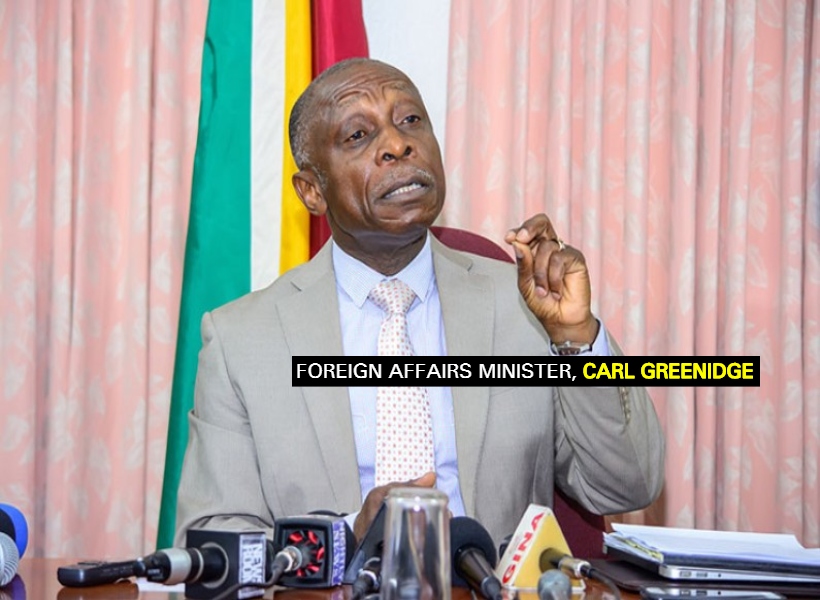 Foreign Affairs Minister, Carl Greenidge, informed the National Assembly today of the aggressive actions taken against Guyana by Venezuela as well as the subsequent response of the coalition government.

Greenidge noted that on December 22, last, the Ministry of Foreign Affairs received a report from Esso Exploration and Production, Guyana Limited (Exxon Mobil) that vessels under contract by the company, performing exploratory seismic work within the Stabroek block were intercepted at 10.30 hours that same day by the Venezuelan Navy.

Greenidge said that a reckless attempt was made by the Venezuelans to land a helicopter on the deck of one the Exxon contracted vessels, the Ramform Tethys. He said that vessel was flagged by the Government of the Commonwealth of the Bahamas and had a total of 70 crew members on board including the Captain. The Minister said that the helicopter was intercepted in the Exclusive Economic Zone (EZZ) and continental shelf of the Cooperative Republic of Guyana at an approximate distance of 140 kilometres from the nearest point to the provisional equidistant line with Venezuela and some 250 kilometres from Punta Playa, the westernmost point on the land border of Guyana.

More than two weeks (on December 6, 2018) prior to this interception which the Venezuelan report feigned was a surprise, Greenidge said that the world and its mariners, including Venezuela, had been alerted to the intended commencement of seismic work on Guyana’s EEZ. Greenidge said that this alert was by way of an advisory from Guyana.

He said, “Rather than speak to us, Venezuelan authorities waited, tried to seize the vessel and then sent us a Note Verbal dated December, 20. It apparently had taken until December 22, to move electronically or physically from their Ministry of Foreign Affairs in Caracas to our Embassy in Caracas. Of course there is a Venezuelan Embassy in Georgetown. Guyana’s response has been to defend its sovereignty and sovereign rights firmly, consistently, peacefully and fully in accordance with international law….”

Greenidge told the House that his Ministry sent that same day, a formal protest to the Government of Venezuela conveying the complete rejection by the Government of this hostile and unlawful act. He said that Venezuelan officials were told that their country’s threat and use of force to impede Guyana’s exercise of sovereign rights in its Exclusive Economic Zone, is a manifest violation of the Charter of the United Nations and general international law.

He noted, “Concerned for the security of the crew of the vessel, and in keeping with its international obligations, Guyana also informed the several Governments of the seventy crew members (including China and the USA) whose safety had been endangered…”