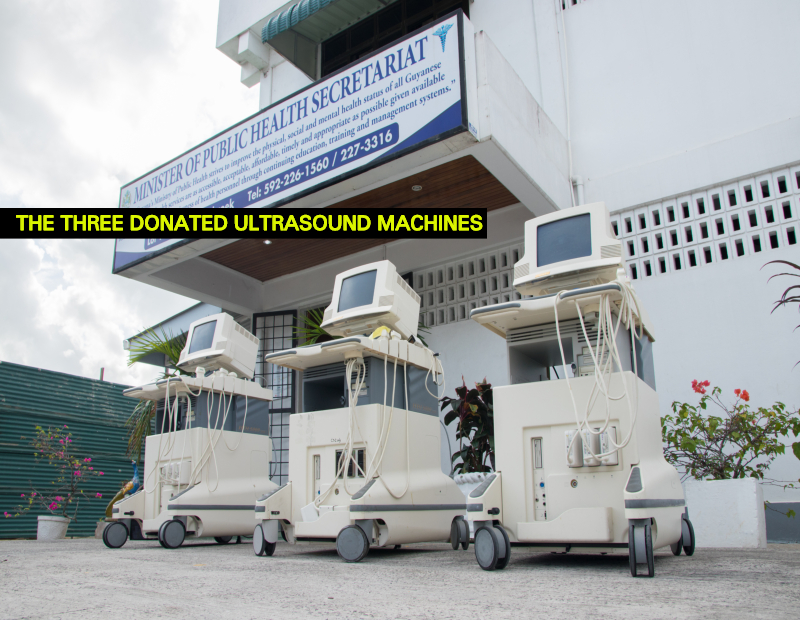 Intended to help improve the delivery of healthcare, three ultrasound machines were today handed over to the Ministry of Public Health (MOPH), compliments of the Ministry of Foreign Affairs (MOFA).

During the simple handing over ceremony held in the Lot 1 Brickdam, Georgetown compound of the Public Health Ministry, Senior Minister of Public Health Mrs. Volda Lawrence said one of the donated items will be given to the Diamond Diagnostic Centre, on the East Bank corridor; another to the C.C. Nicholson Hospital, East Coast Demerara; and the final machine to the Ministry’s Materials Management Unit (MMU).

Director of the International Desk at the MOPH, Mr. Denroy Tudor, explained that the ultrasound machines were contributions from the North York General Hospital which donated them to the Guyana Christian Charities Consulate in Toronto, Canada. Tudor said the North York General Hospital had given four machines last year too but those went to the St. Joseph Mercy Hospital which were uplifted before the official handing-over ceremony.

The machine in the care of the MMU will cater for future emergencies in the public health system.

Dr. Perry welcomed the donation which she described as timely, noting that the ultrasound machines “will decrease the patient load of the service being offered specifically at the Georgetown Public Hospital Corporation (GPHC), by allowing patients to access the services at the Regional Hospitals thus ending the need for them to seek the service at the usually-over-crowded GPHC.”

Both Perry and Tudor agreed that the donation of the machines will benefit patients, improve health services offered by the regional hospitals and serve as a fillip to the novel smart hospital initiative currently undertaken by the Public Health Ministry with technical and financial support from the Pan American Health Organization/World Health Organization.