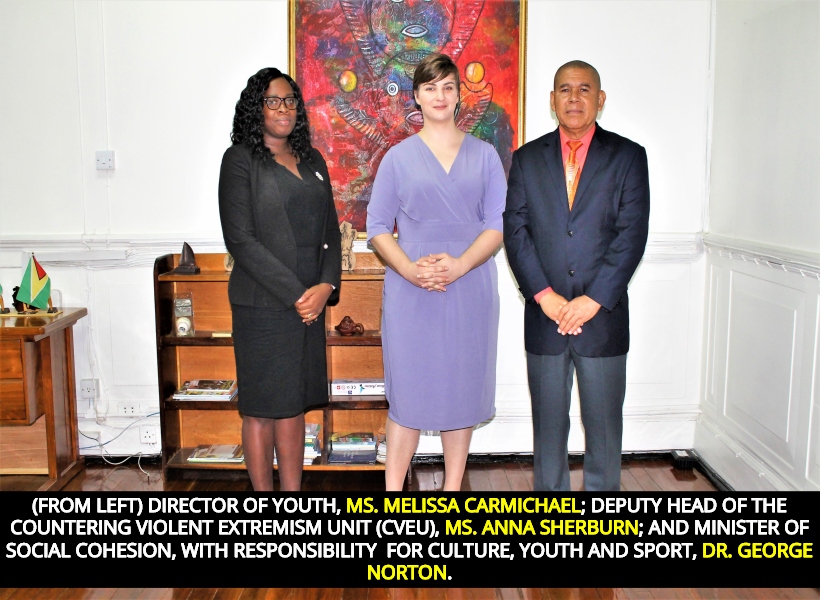 Key focus must be directed to the youths when implementing measures to counter extremist acts of violence, says Minister of Social Cohesion, George Norton.

This notion was emphasised when the minister met with Ms. Anna Sherburn, Deputy Head of the Countering Violent Extremism Unit (CVEU) of the Commonwealth Secretariat.

The engagement, which was held at Minister Norton’s Main and Quamina Streets, Georgetown office, also included the Director of Youth, Ms. Melissa Carmichael.

The meeting was part of a visit by the CVEU to discuss with stakeholders in Guyana the gaps in the national development framework for countering violent extremism.

Sherburn, during the meeting, explained that the Commonwealth is looking to partner with developing countries to customize programmes best suited for their criminal climate.

Minister Norton, in expressing satisfaction with the initiative, noted that while Guyana is not a hub for terrorist activity, there has been increased threats at the country’s borders.

“Our border security has been heightened, but having the Commonwealth further assist in strengthening that framework would be good,” Dr. Norton noted.

Minister Norton, who also holds the important responsibility for Culture, Youth and Sport, recommended that careful attention be placed on the youth population when such issues are addressed.

It was then that the Director of Youth, Carmichael, pointed to the increased cases of young people making threatening and hateful posts on Facebook and other social media outlets. “Because of where we are politically, you would find young people getting into very intense arguments on Facebook, issuing threats and all sorts of things,” Carmichael noted.

She then inquired whether the Commonwealth can assist the Youth Department in developing a strategic plan geared at tackling such reckless behaviour.

“Yes, as a matter of fact, this is something that has been done before. While we were in Trinidad, we had someone from Facebook come down and have talks with a number of young people, trying to get them to be more responsible while online,” Sherburn noted.

Wrapping up the meeting, Sherburn added that upon her return to the Commonwealth Secretariat in London, she will commence work on a comprehensive proposal intended to bridge the gaps in Guyana’s fight against violent extremism.

“As long as the proposal is approved by Guyana, the Secretariat will begin its work in helping to implement the proposed programmes to counter violent extremism here,” Sherburn asserted.