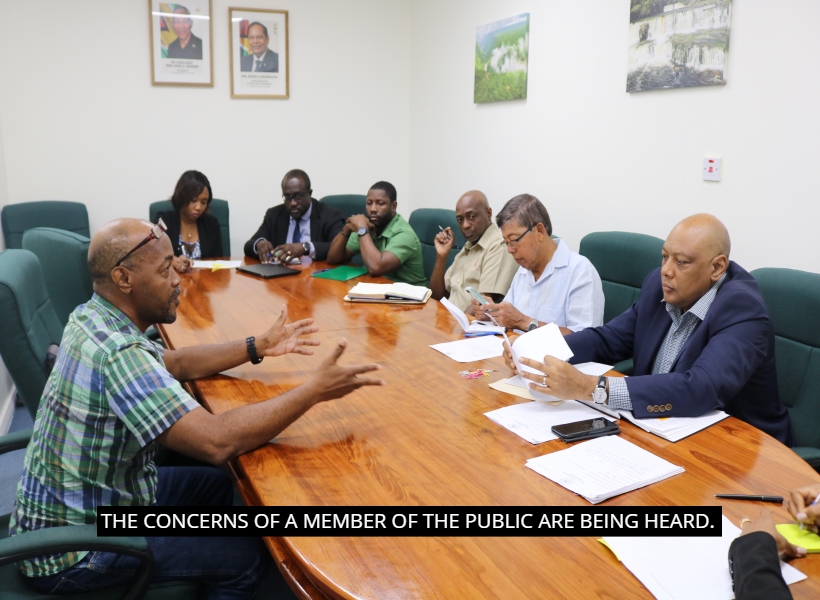 “Complaints, criticisms and recommendations are highly valued, since they aid in the better and more effective functioning of the Ministry and its agencies in particular, and Government as a whole.” This was the assertion of Minister of Natural Resources, Raphael Trotman following a recent public engagement his Ministry facilitated at its Duke Street, Kingston, Georgetown office.

Coming out from that forum the Minister said, “We have received many thoughtful and detailed comments from persons and are truly grateful for this.” Among the many issues raised, most were related to illegal mining, bad mining practices, mining block allocations, hinterland roads, duty free applications, mining related accidents, labour issues, and forest related issues. Although many of the concerns heard were addressed and sorted immediately, others were put on the front burner with the intention of having swift resolutions, the Minister informed.

Follow up actions, he said, are expected to begin as early as the coming week.

But in moving forward, he noted his Ministry will seek to build on the recent experience and develop and maintain its relationships in order to work with citizens in promoting the responsible and beneficial use of our natural resources.

In a statement the Ministry expressed sincere gratitude to the members of the public who attended the Ministry’s Public Day and gave assurance that those who were unable to meet the Minister of Natural Resources because of the overwhelming response, will be engaged in the coming days.

“We are particularly pleased to have been able to welcome Guyanese from the various regions and giving them an opportunity to meet with the Minister of Natural Resources; Chairman of Guyana Geology and Mines Commission, Mr. Stanley Ming, and a team representing two agencies that fall within the purview of the Ministry; Guyana Geology and Mines Commission (GGMC) and Guyana Forestry Commission (GFC),” the Ministry said in its statement.

It was disclosed too that the Ministry holds engagement with the public, especially those involved in the natural resources sector, at a very high level of importance, and as such, it is critical that as the overseeing body of the sector, “we engage the public not only in the hinterland communities but also in the cities and urban centres. Events of this nature allow us to better understand our sector’s issues and further allow us to find suitable ways of addressing them.”