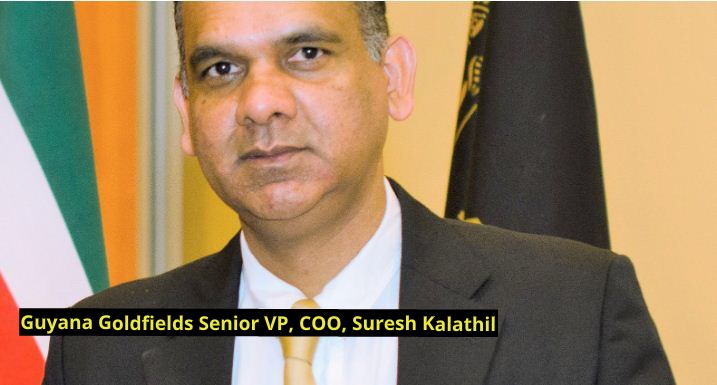 According to the Canada based firm, Kalathil is a mining engineer with more than 25 years’ experience working in open pit and underground operations and major projects around the world. The company noted too that he is a Certified First Class Mine Manager. It was stated that his appointment is the fourth senior hire the company has made as it takes steps to “professionalize” all aspects of its business following the termination of the former Executive Chairman.

Further to this, Guyana Goldfields said that Kalathil is joining its team from IAMGOLD Corporation, where he served as General Manager of Rosebel Gold Mine in Suriname. He led the overall operational and strategic transformation of Rosebel as IAMGOLD embarked on driving efficiencies out of every aspect of the operation’s value chain leading to improved productivity, substantial reduction in all-in sustaining costs (AISC) and increased reserve base to transform it into a profitable, cornerstone asset.

Scott Caldwell, President and Chief Executive Officer (CEO) of Guyana Goldfields said that Kalathil is going to be a great asset to the company. He said, “His extensive international experience managing mining operations and projects will be of great value as we advance our understanding of the geology and gold mineralization at the Aurora Gold Mine and refocus our exploration efforts.”

About two weeks ago, concerned shareholders who have a five percent stake in Guyana Goldfields called for an urgent meeting to be held after nothing that the reckless decisions of the current board have led to the loss of over US$700M in shareholder value which was accumulating since 2016.

But three days ago, the company finally responded to the accusations, noting that Sheridan is partly responsible for many of the issues he and his colleagues are now raising. The company said it is disappointed that Sheridan refuses to accept any of the blame or responsibility for the company’s operational, governance and governmental relations challenges which arose over his 20-plus years as the company’s top executive.

Be that as it may, Guyana Goldfields went ahead and scheduled May 22 as the date to address all the concerns raised by Sheridan and the other five percent shareholders.