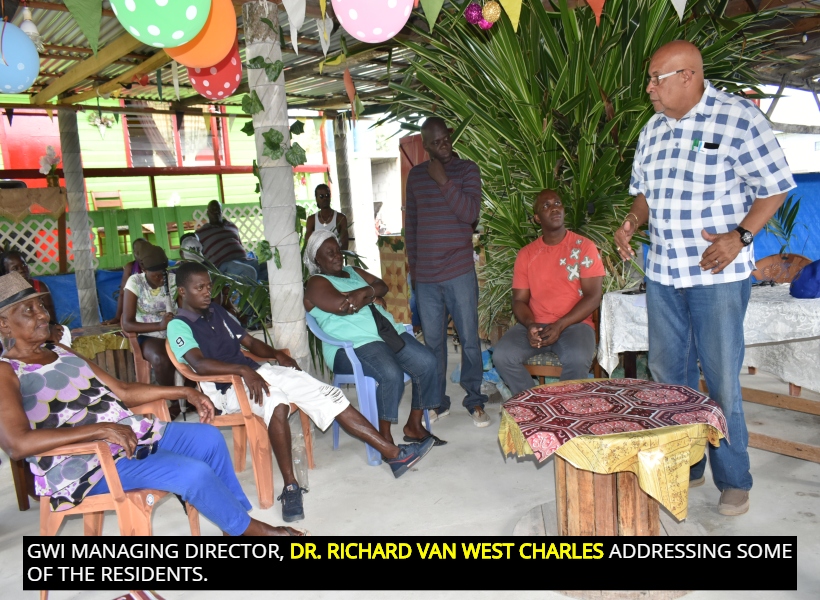 The inconvenience of joining a line to access water and fetching it for long distances will soon be a thing of the past for the residents of Durban Backlands Squatting Area. This is following an intervention by the Guyana Water Incorporated to bring relief.

The squatting area aback the Chinese Embassy on Mandela Avenue, which is seeking to become regularized, is home to over 2500 persons. The residents currently access water from limited makeshift standpipes and the East Demerara Water Conservancy. While regularization is yet to be done, GWI’s Managing Director, Dr. Richard Van West-Charles, responded to a request by village representative, Mr. Kyle Solomon, to provide easy access to potable water to the families residing there.

After being made aware of the need in the area, the Managing Director, accompanied by Mr. Solomon, Astell Collins of the Ministry of the Presidency and other GWI officials conducted a walk-through in the community on Friday.

Later that day, a GWI technical team returned to map out the area and determine where lines are to be laid and standpipes to be erected.

On Saturday, January 26 the team held a community meeting with residents to inform them of the works to be undertaken.

GWI’s Georgetown Manager Mr. Curtis Niles informed them that works will commence on Thursday, January 31 with the clearing of lands. Following this, they will move to strategically erect a total of 24 stand pipes along the village tracks. He also noted that some adjustments will have to be made to some property boundaries so as to facilitate the project.

Meanwhile, Dr. Van West-Charles advised against tampering with GWI’s infrastructure, noting that such actions are illegal and can cause contamination in the pipeline.