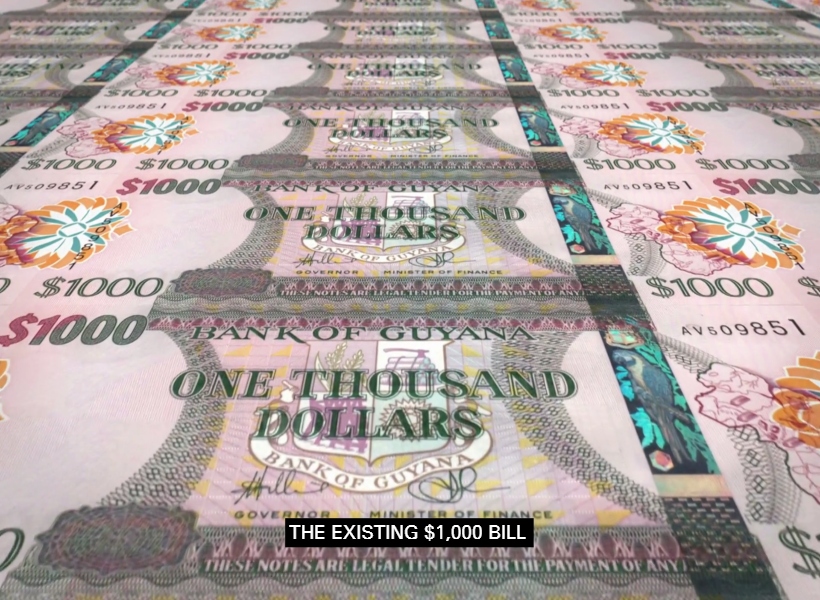 A new and upgraded $1,000 will shortly be placed into circulation complete with enhanced security features. This is according to information released by the Bank of Guyana which said that this newest development comes as part of its commitment to the continuous upgrade of the Guyana currency notes.

Moreover, the Bank has announced that it “shall issue with effect from March 4, 2019 an upgraded $1,000 currently note.” It pointed out that while the note will keep most of the elements of the previous note it will entail two significant changes to the front and back.

Changes will include the replacement of the Holographic Stripe at the front of the note with a RAPID® micro-optic security feature. This 6mm wide, blue micro-optic feature displays fluid and highly visible movement behind the national flower – the Victoria Regia Lily – which is also represented in print on the edges of the note.

“With only a slight tilt of the banknote, the bands in the RAPID feature move up and down behind the static numerals ‘1000’ as the flower petals shimmer in blue and white,” the Bank has revealed.

Additionally, it has revealed that the replacement of the windowed security thread at the back of the currency note with an embedded plastic thread, which is visible when held against the light.

According to the Bank the $1,000 currency note will circulate alongside the existing notes of the same denomination.