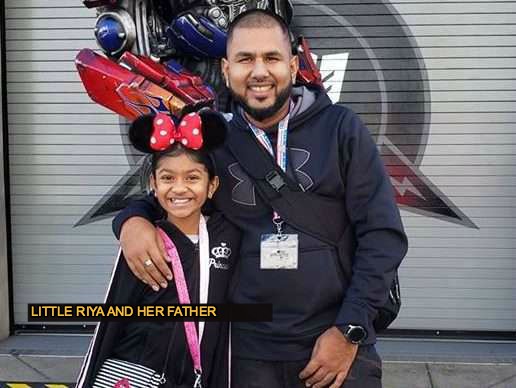 On Valentine’s Day, an 11-year-old child was senselessly murdered by her Guyanese father in Canada.

Riya Rajkumar was abducted by her 41-year-old father, Roopesh Rajkumar, on the night of her birthday. Her body was later found inside a house in Brampton, Canada.

The suspect was found with a self-inflicted gunshot wound. He is currently being treated at a Toronto trauma centre.

According to information received, the deceased’s parents separated when she was younger. Although the 11-year-old resided with her mother, she would visit her father on weekends and holidays.

On the day of the murder, little Rajkumar was celebrating her birthday with her father but when she failed to return home on time, her mother contacted the police.

Additionally, there are reports that the child’s father had been sending text messages to his former spouse, suggesting that he was going to harm himself and his daughter.

An amber alert was subsequently sent out and Roopesh was arrested after midnight on Thursday. After being interrogated, the cops were directed to a house where the little girl’s body was found.

Although innocent until proven guilty, Canadian police officers are trying to determine a potential motive for such a horrific act — as well as the cause of death.

There were no “obvious signs of trauma” to the child’s body, which makes the results from the scheduled autopsy even more coveted for detectives trying to untangle the mystery.

Meanwhile, the child was described as quiet, brilliant, talented and loving.