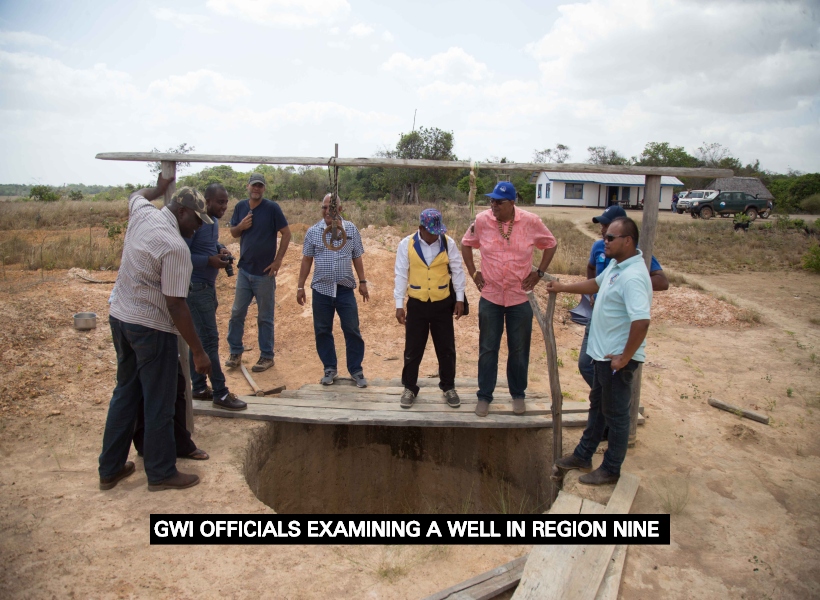 The integrity of infrastructure and supposed design flaws of water systems in the Hinterland is of great concern to GWI, with some of these water systems being constructed many years ago while others were established in the early 2000s and failed early on.

The most recent observations were made during a visit to Annai and its sub-regions – Rupertee, Kwatamang and Wowetta and the villages of Katoonarib andSawariwau in Region Nine on February 15 and 16.

GWI’s Managing Director, Dr. Richard Van West-Charles and Executive Director of Project Implementation and Partnership Building, Mr. Ramchand Jailal assured residents that the utility will do everything in its power to provide both temporary and long term solutions for access to water.

In Annai, residents noted that they receive water for two hours, three days a week, from four water systems that were constructed many years ago. In existence is a trestle that was poorly designed and now sits as a monument in the community, while the wells are not producing enough and some structures are rotting.

In this regard, Dr. Van West-Charles committed to re-modelling the systems within the first quarter of the year. He also promised that the trestle that has become a white elephant will be relocated and put to use. However, as a more immediate intervention, GWI will work to increase water supply hours to the population of over 600 by analyzing the capacity of the existing wells and the solar panels.

Works to be undertaken in the other sub-regions of Annai include improving productivity of wells, increased storage capacity, upgrading solar panels, construction of trestles and water quality testing.

In cases where additional water sources are needed, Dr. Van West-Charles explained that the utility is now in a position to accurately identify sites for drilling. This was made possible through new, innovate logging equipment acquired from Brazil. “So with the new technology, we will be able to drill more specifically and have more success in a timely manner,” the Managing Director posited.

Meanwhile, in Katoonarib and Swariwau, the Managing Director told residents that GWI is not only concerned about water for consumption but also for the economic and social wellbeing of citizens.

Dr. Van West-Charles, who was accompanied by Minister of Telecommunications, Honourable Cathy Hughes and a team of officials, said health centers cannot function without continuous access to potable water to carry out its functions.

The GWI team therefore reassured residents that their water infrastructure that existed for many years will be looked at and rehabilitated where necessary to provide easy access to communities.

Each community was tasked with identifying two service men who will be paid to maintain the water systems.