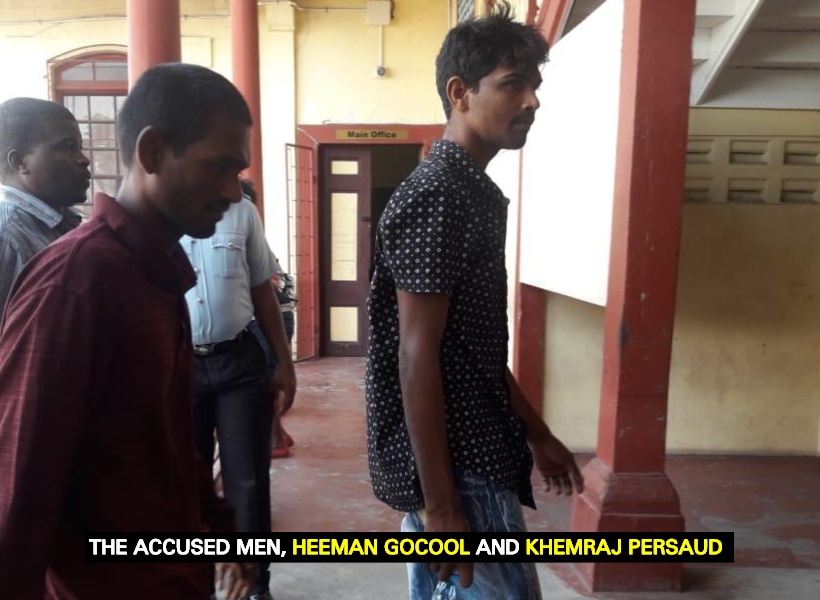 Days after a Samatta Point, Grove, East Bank Demerara handyman was found dead with a wound to the lower abdomen, two men were this morning charged for allegedly murdering him.

The men, Heeman Gocool and Khemraj Persaud, both appeared before Magistrate Faith McGusty in the Georgetown Magistrates’ Courts.

They were not required to plead to the indictable charge which stated that on February 13, 2019 at Samatta Point, Grove, they murdered 53-year-old Rohan Persaud also known as ‘Ravi’ and ‘Kanhai’.

The matter was prosecuted by Police Prosecutor Dominic Bess who asked the court for an adjournment.

The Magistrate granted an adjournment until March 12, 2019.

According to information, on the date in question, the men were said to be in company of the now dead man.

Police believe that the 53-year-old man was slain between 01:00hrs and 06:30hrs last week Wednesday, January 13, 2019 at Back Street, Grove, East Bank Demerara. His body bore a wound to the lower abdomen.

Neighbours of Back Street, Grove Housing Scheme said that Persaud was seen around 18.00 hrs the day prior, drinking with two men at a nearby culvert.

A report was then made, an investigation was carried out and the Gocool and Persaud were arrested and charged.