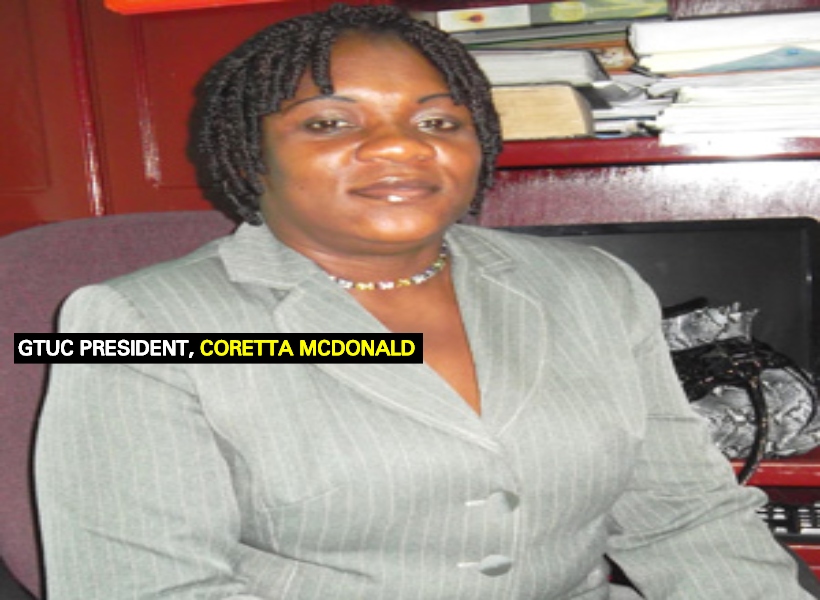 President of the Guyana Trades Union Congress (GTUC), Ms Coretta McDonald, is calling on the Government of Guyana to stop sitting on its hands and take a unified stance against the ruthless nature of Russian controlled Bauxite Company of Guyana Incorporated (BCGI).

These comments come in the wake of the company’s firing on Monday of 61 workers who protested a ‘pay increase’ imposition that had not been preceded by any negotiating exercise.

McDonald said that this kind of arbitrary high-handedness, underpinned by the total and complete exclusion of the Guyana Bauxite & General Workers Union (GB&GWU) from the negotiating process, has always been an integral part of the management style of the Russian company’s management.

McDonald in a  statement to the press moments ago said, “While the Guyana Trades Union Congress’ primary concern at this time is that the dismissed workers be restored to their jobs, immediately, without loss of pay and that the company be required, as obtains under the Laws of Guyana to recognize and engage the GB&GWU, we are no less concerned over the persistence of the Government of Guyana with its ‘policy’ of leaden-footed indifference to the sustained arrogance and abusiveness  of the Russian management of the BCGI.”

The GTUC President added, “We need to remind ourselves that BCGI has a significant stake in the country’s bauxite industry. That stake, however, does not extend to the sovereignty of Guyana.”

On this background, McDonald said that the GTUC immediate action in response to the arbitrary and illegal dismissal of the 61BCGI employees.

She said that GTUC wants robust and unambiguous public statements from both the Government of Guyana and the Opposition PPP/C, specifically condemning the dismissal of the striking workers and calling on the management of BCGI to respect the laws of Guyana with regard to trade union membership and the rights and entitlements appended thereto.

The GTUC President said  that this should be followed immediately by a meeting between Government and the management of BCGI to follow through on details surrounding their public call and the re-establishment of clear guidelines and understanding of RUSAL/BCGI’s need for compliance with all of Guyana’s industrial laws and practices if the said company is to continue enjoying the goodwill of government and be at harmony with the Guyanese society.  She said that details should also include: unconditional reinstatement of the dismissed workers; respecting the workers’ recognised Union of choice, following the instructions issued by the Department of Labour; respect the workers’ right to strike; and the need to sit at the table to negotiate with the Union, the Terms of Resumption which must include no break in service, no penalties or recriminations.

She also called for an impending visit to BCGI work site by a delegation comprising officials of the Ministry of Social Protection, the Ministry of Natural Resources and the GB&GWU to engage management and workers (including the dismissed workers) in meetings with a view to their reinstatement and to the formal recognition of the GB&GWU as the union representing the BCGI workers.