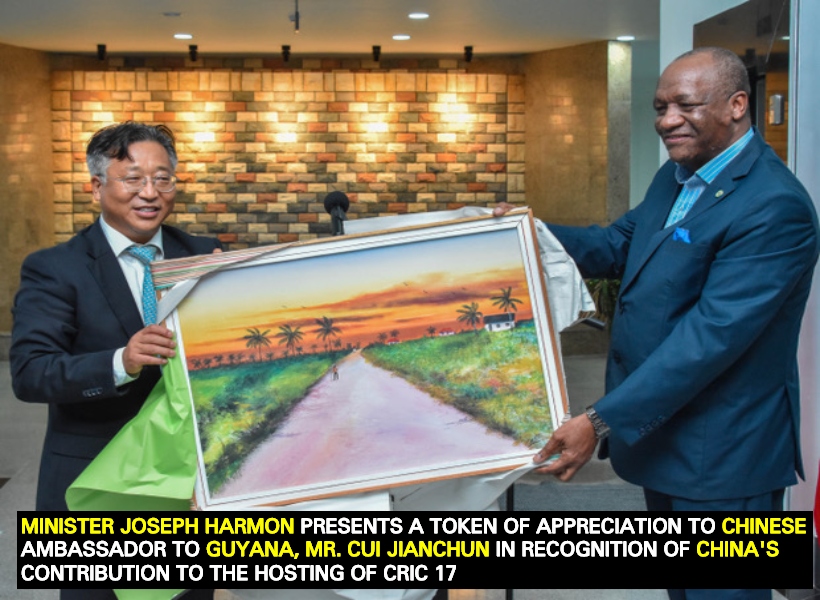 Minister of State, Mr. Joseph Harmon, last evening said Guyana has come in for high commendation from the international community for a job well done in the successful hosting of the Seventeenth Session of the Committee for the Review of the Implementation of the Convention (CRIC 17).

The Conference was held on January 28 to 30, 2019 at the Arthur Chung Convention Centre (ACCC) and saw the participation of 94 countries, seven Inter-Government Organisations (IGOs), seven United Nations agencies, and 20 Non-Governmental Organisations (NGOs), bringing the number of participants to 566.

Minister Harmon, who was speaking at a small appreciation ceremony held for the local organising committee staff and volunteers at the ACCC, said that the Executive Secretary of the United Nations Convention to Combat Climate Change (UNCCD), Ms. Monique Barbut, who was also here for the conference, was most pleased with the arrangements, facilities, and Guyanese hospitality.

Noting that this is the first such conference to be held in the Anglophone Caribbean since the hosting of the Non-Aligned Movement Conference in 1972, the Minister of State said that all of Guyana, the Caribbean, and Latin America can be proud of what has been achieved.

Minister of Citizenship, Mr. Winston Felix, whose department had the task of offering visa and other support services to the visitors, said that he is extremely proud of what the Guyanese team was able to accomplish through thorough planning and collaboration.

The People’s Republic of China, through its Embassy here in Guyana, contributed US$1.1 million for the procurement of critical equipment for ACCC to ensure the successful hosting of the Conference.

Minister of Public Telecommunications, Ms. Catherine Hughes, under whose purview the ACCC falls, said that Guyana remains grateful to the nation for its continued support and contributions. The success of the Conference highlights the good relations Guyana shares with China, she said.

Her sentiments were shared by Chinese Ambassador to Guyana, Mr. Cui Jianchun, who also heaped commendations on Guyana for a job well done as well as the opportunity to fortify the relations between the two countries.

All volunteers and staff were presented with a certificate of appreciation signed by the Minister of State for their efforts.