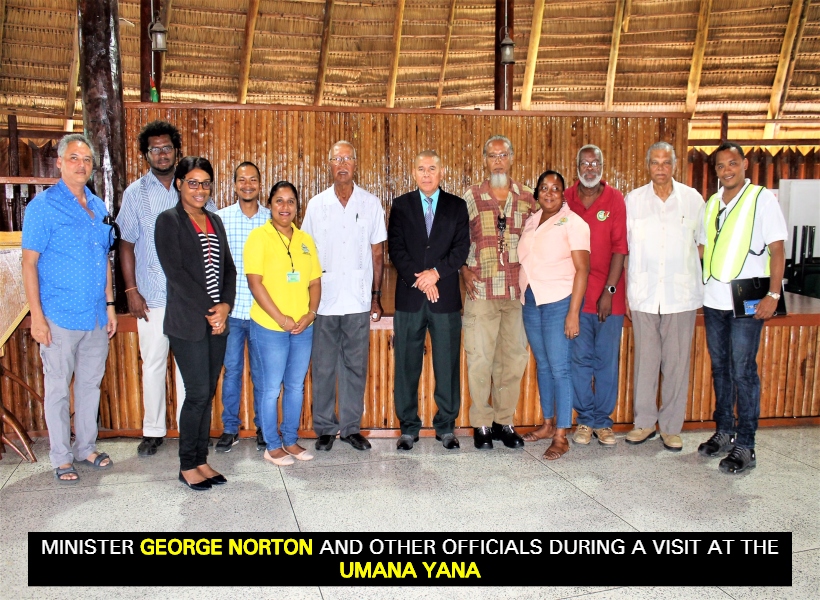 The erection of a 50-foot Totem Pole in the environs of the Umana Yana is on the horizon.  In this regard Minister of Social Cohesion with responsibility for Culture, Youth and Sport Dr. George Norton, recently met with a number of stakeholders to discuss the implementation of an initiative.

Totems or totem poles are monumental sculptures carved on poles, posts or pillars with a series of totemic symbols which represent family lineage, mythical or historical incidents specific to indigenous culture.

The concept to have a totem pole erected was initiated in 2015 through discussions on the preservation of indigenous culture in Guyana. Those discussions were then led by Minister of Education, Nicolette Henry, and Minister of Indigenous Peoples’ Affairs, Honourable, Sydney Allicock.

The erection of the totem pole was scheduled to be done during the commemoration of the nation’s 50th Independence celebration as part of the activities to celebrate the Golden Jubilee.

Award-winning Guyanese sculptor, Winslow Craig, was commissioned to sculpt the 50-foot pole made from bulletwood log which, upon completion, would be erected in the compound of the Umana Yana in September 2017, during the Amerindian Heritage observances. However, some setbacks were encountered and the pole was not planted as scheduled.

Minister Norton added that the process to have the artifact constructed was no easy feat, consultations were had prior to the selection of an artist as well as the effort to bring the project to life are all aspects during the process which must be taken into account as resources were expended.

Minister Norton, who now holds responsibility for the Department of Culture, also expressed that the final aspect to bring this project to completion is long overdue. He is expected to host a follow-up meeting during the month of March to determine definitive deadlines.