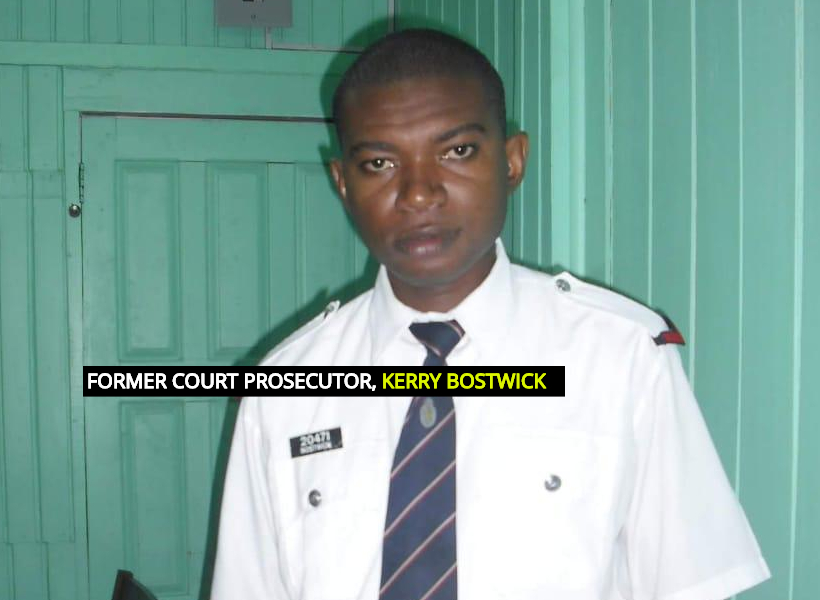 A former member of the Guyana Police Force (GPF), who also served as a court prosecutor, was today slapped with three fraud charges for allegedly defrauding three persons of $300,000 under the pretense of getting a magistrate to drop an illegal firearm possession charge.

The first charge against Bostwick stated that, during the month of December 2016 at Georgetown, with the intent to defraud, he obtained from Moreine Kalli the sum of $100,000 by falsely pretending he was in a position to have a matter against her brother, Tyrone Kennedy, dismissed by the presiding magistrate.

It was further alleged that, during the month of January, 2017 at East Ruimveldt Georgetown, with the intent to defraud, he obtained from Oxcarine Hardy, the sum of $100,000 by falsely pretending he was in a position to have a charge against her son, Tyrone Kennedy, dismissed by the presiding magistrate.

The last charge stated that, on January 31, at East Ruimveldt Georgetown with the intent to defraud, he obtained the sum of $100,000 by falsely pretending he was in a position to have a charge against Tyrone Kennedy for possession of a firearm without a licence dismissed by the presiding magistrate.

Bostwick, who was represented by attorneys-at-law Bernard Dasilva, Eusi Gomes, and George Thomas, pleaded not guilty to all the charges after they were read to him in the Georgetown Magistrates’ Courts.

According to information, during the time of the offence Bostwick was stationed at the Brickdam Police Station and attached to the Complaints Department; he was the investigating officer.

It is reported that the family of Tyrone Kennedy, the man charged with illegal firearm possession, went to the Corporal to make an inquiry. It was then that Bostwick told them that he could make a magistrate dismiss the charge against their relative.

Bostwick then reportedly contacted the relatives and told them that he wanted $500,000 to make a magistrate dismiss the matter against Kennedy.

The relatives, upon hearing Bostwick’s request, went home and returned to the court with $300,000 and, upon arrival back at the court, Bostwick allegedly exited the courtroom with a white paper bag and told them to place the money inside. He then went back inside the courtroom and prosecuted the matter.

Sometime during the month of January 2016, the trial of Kennedy concluded and he was sentenced to three years imprisonment, which he is currently serving at the Mazaruni Prison for the offence. The victims, upon hearing that Kennedy was sentenced, went and reported the matter to the police.

An investigation was then carried out and Bostwick was arrested and, hence, charged for the offence.

While the Court Prosecutor had no objections to bail being granted to Bostwick, he asked that conditions be attached.

The magistrate, after listening to the facts, released Bostwick on $150,000 bail. He was instructed to make his next court appearance on March 22.