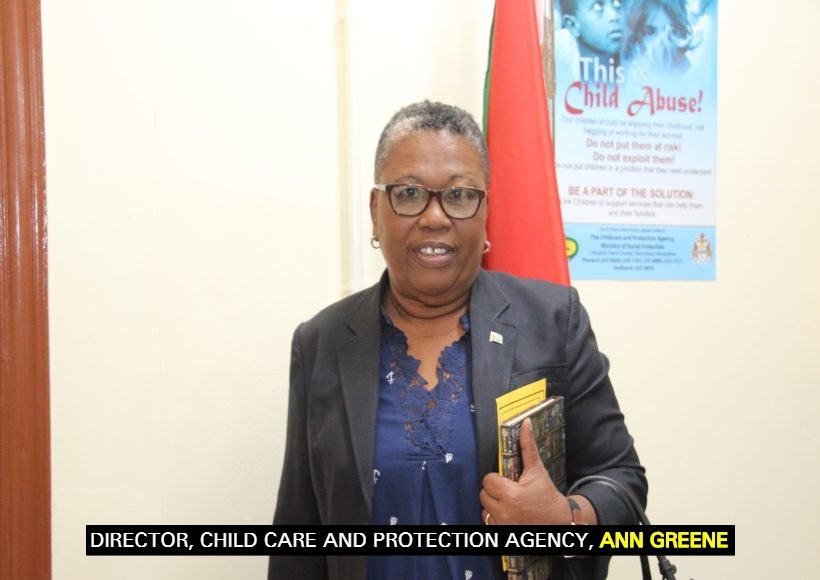 Even as the Ministry of Social Protection’s Childcare Protection Agency (CPA) works towards combating the daunting scourge of child abuse, a troubling number of children continue to be abused across the country, with nearly 500 cases being recorded for the year thus far.

This is according to information released by the CPA. According to CPA Director, Ann Greene, a single child being abused is far too many. She however noted that the efforts of the Agency to combat child abuse have been yielding results. The total number of recorded cases so far for this year is 495 and CPA officials are hopeful the number does not reach or surpass that of last year’s. Last year CPA records show that the number of abuse cases against children amounted to 4,917 cases.

According to information disseminated by the CPA, there have been 229 cases of neglect, 96 cases of physical, 123 cases of sexual, 38 cases of verbal/emotional, six cases of witnessed abuse and three cases of abandonment already recorded for this year.

The CPA Director revealed that in 2018 there were: 2,431 cases of neglect. Following closely behind was that of physical abuse, which based on the records of CPA, was 1,115 cases. During the past year too, children were subjected to other forms of abuse including: sexual (980 cases), verbal/emotional (308 cases), witnessed abuse (50 cases) and 33 cases of abandonment.

According to Greene, CPA’s objective is to work and collaborate with other agencies such as the Guyana Police Force, judiciary, health and education sectors, probation, national and governmental departments, churches, youths and community groups and NGOs to protect children and stop child abuse.