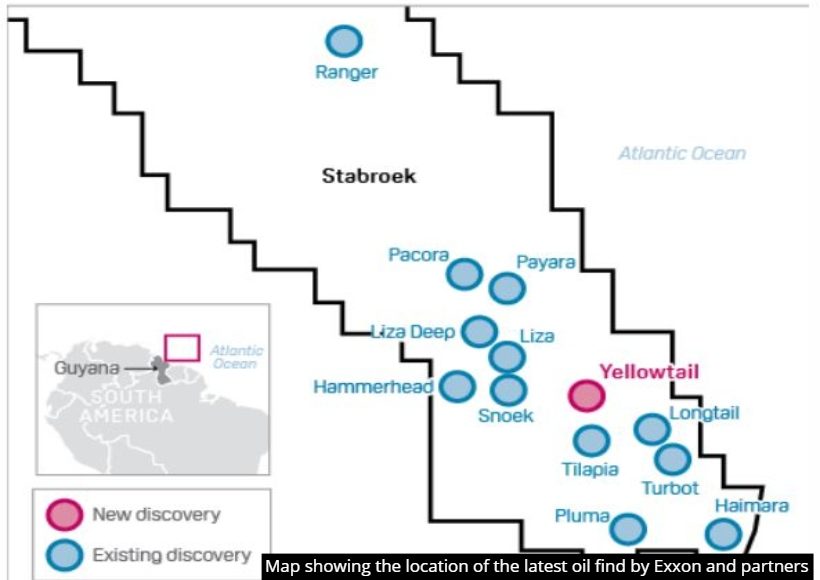 In light of its 13 successful oil discoveries, ExxonMobil and its partners Hess Corporation and CNOOC will continue to aggressively explore the Stabroek Block. In fact, three more exploration wells are planned for 2019.

This is according to the Chief Operating Officer (COO) for Hess, Greg Hill. During the company’s first quarter of 2019 earnings conference call, Hill said that the locations of the well are being finalized.

Hill also noted that the Stabroek Block partners are thrilled about the Yellowtail-One, which was Guyana’s latest offshore deepwater discovery. Hill said that the Yellowtail-One well contains rich oily fluids, similar to those of the country’s initial find, which is currently being readied for first production early next year.

He said, “The 292 feet of high-quality oil-bearing sandstone reservoir at Yellowtail, which was drilled to 18,445 feet in more than 6,000 feet of water, was a great result. The well had good porosity and good oily fluids that are Liza-like…This is good news for us.”

Furthermore, Hill noted that the development of Stabroek’s Liza Phase One is continuing as installation of the topside and modules on the 120,000 barrels of oil per day (b/d) Liza Destiny Floating, Production, Storage and Offloading (FPSO) vessel that will take care of the field’s production from the first quarter of 2020 and onward, is now complete. Hill said that the vessel should arrive offshore Guyana from a shipyard in Singapore in the third quarter.

The official said, too, that subsea infrastructure is “well advanced” on the project as installations of subsea umbilicals – cables and conduits – as well as risers and flow lines is scheduled for the second quarter.

In addition, sanction of Liza Phase Two has already been granted. Guyana Standard understands that this phase will utilize a second FPSO, already named Liza Unity, with 220,000 b/d of capacity. Hill said that Phase Two is on track for first oil in mid-2022.

He noted as well that a final investment decision is also expected later this year for Phase Three, producing the Payara discovery north of Liza. Hill said that this plan calls for a projected 180,000-220,000 b/d FPSO with startup expected as early as 2023.