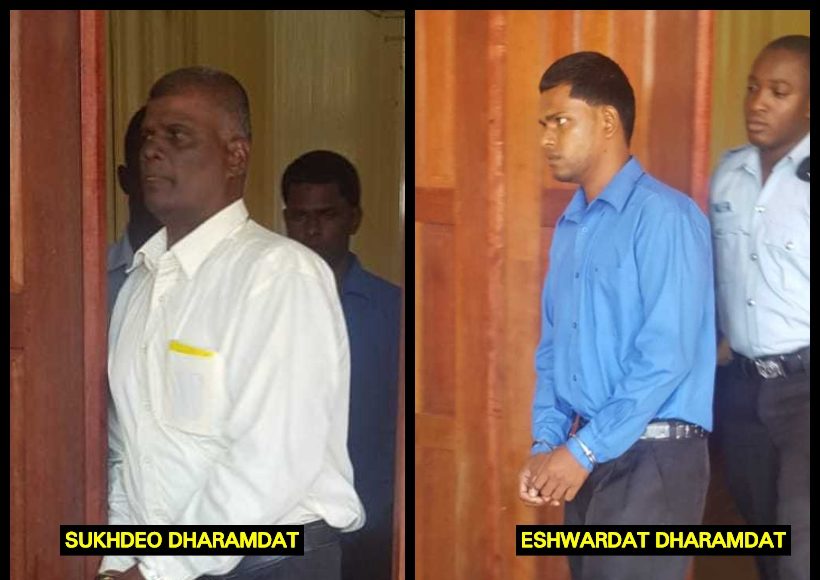 Weeks after they were found guilty of beating a Mahaica accountant to death during a fight over a disputed plot of land, a father and his son were today sentenced to 65 years and 20 years, respectively, in prison.

An unremorseful Sukhdeo Dharamdat and his son, Eshwardat Dharamdat, had their sentences handed down this morning by Justice Navindra Singh at the High Court in Georgetown. Following a trial over two weeks ago, a 12-person jury found Sukhdeo guilty of murdering Nandkishore, and his son guilty of the lesser count manslaughter.

According to reports, the now dead man and two of his family members were in the process of erecting a fence when a heated argument ensued between them and the Dharamdats. Things later escalated into a fight during which the Dharamdats attacked Nandkishore with a cutlass and two of the posts meant for the fence.

It was reported that Nandkishore, who sustained a cracked skull, was rushed to the hospital where he later succumbed to his injuries. The land on which the fence was being erected was the subject of a land dispute between the Dharamdats and Nandkishores.

However, during the Dharamdats’ trial, it was revealed that the Nandkishores won rights to the land through a court order.

Today, a probation report was presented to the court and it pointed to the testimonies of Mahaica villagers in relation to the two convicts. A probation officer told the court that villagers described the elder Dharamdat as a “downright bully” who was in the habit of fighting persons for their lands.

Both father and son expressed their dissatisfaction at the verdict of the jury. The elder Dharamdat maintained that the land belonged to him and that he had been occupying it for over 60 years. While, the younger Dharamdat showed remorse by telling the court he was sorry for what had happened, his father insisted that he owns the land, and that it was the Nandkishores who instigated the fight.

From the 20 years’ sentence imposed on the junior Dharamdat, Justice Singh ordered the prison authorities to deduct the time he spent in pre-trial custody. His father will serve his sentence as is, since the Judge had already deducted the time he spent on remand pending trial.