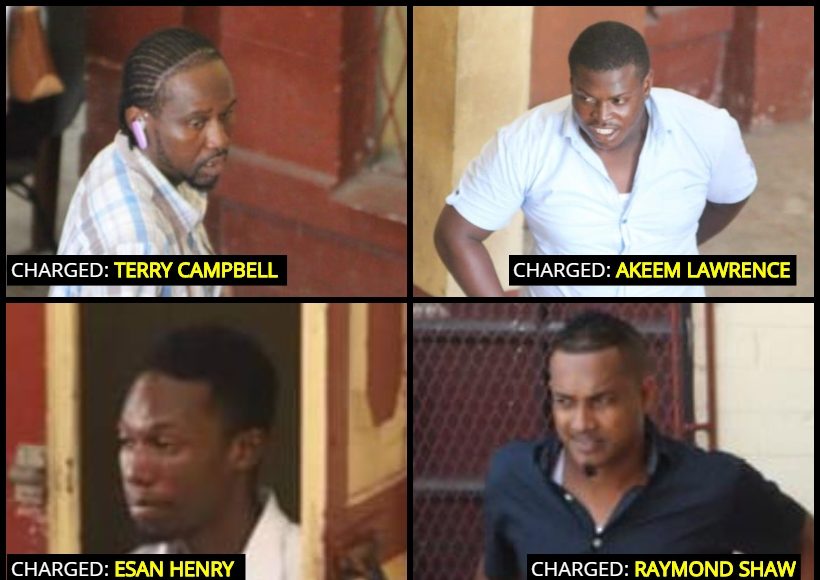 Two minibus drivers, a taxi driver, and a conductor were this morning charged and released on $200,000 bail each after being accused of attempting to murder a businessman.

Raymond Shaw, 33, minibus driver, of ‘A’ Field Sophia; Terry Campbell, 41, a minibus driver of Werk-en-Rust; Akeem Lawrence, 24, a conductor of 340 ‘B’ Field, Sophia; and Esan Henry, 20, a taxi driver of South Ruimveldt, Georgetown, all made appearances this morning before Chief Magistrate Ann McLennan.

The allegation against the quartet stated that, on February 23, 2019, at Peter Rose and Forshaw Street, Queenstown, they unlawfully and maliciously wounded Vishnu Boodram, with the intent to commit murder.

They were not allowed to plead to the indictable charge after it was read to them in the Georgetown Magistrates’ Court.

Both lawyers, in successful bail applications, asked the court to release their clients on reasonable bail, citing that they are not flight risks and that they helped with the investigation.

Facts presented by Police Prosecutor Gordon Mansfield stated that, on the day in question, the victim was driving his car along Forshaw Street when the four defendants, who were in a minibus, approached him. The men got into an argument and, as a result, the defendants attacked Boodram with knives, causing him to receive several chops about his body. The injured man was then rushed to the Woodlands Hospital where he was admitted.

The matter was reported and the defendants were all arrested and charged for the offence.

While the prosecutor made no objections to bail being granted to the defendants, he asked that conditions be attached. The Chief Magistrate, after listening to the facts, released the men on $200,000 bail each.

Conditions of the bail are that the men lodge their passports with the clerk of court and report every Monday to the Criminal Investigation Department (CID) Headquarters.

The magistrate also instructed the men not to be within 50 feet of the victim or cause anyone to make contact with him until the hearing and determination of the Preliminary Inquiry (PI) into the matter.