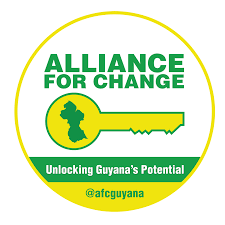 Stating its commitment to the rule of law and adherence to the Constitution, the Alliance For Change (AFC), which together with the A Partnership for National Unity (APNU) makes up the coalesced ruling administration, has said that it respects and accepts last week’s rulings of the Caribbean Court of Justice (CCJ).

In a statement, the party said too that it is of the view that the resignation of Justice Patterson as Chairman of GECOM subsequent to the Court’s ruling was correct and proper. It went on to note that, “The Party now believes that the process of appointing a new Chairman should be undertaken with the utmost urgency and concluded within two weeks.”

Further, the AFC said that it holds the view that this process is critical to public confidence in the outcome of the next General and Regional Elections and that there is no shortage of fit and proper Guyanese who would be acceptable across the political divide to fill this position.

The party is, therefore, urging that early consultations be held in good faith between President David Granger and Opposition Leader Bharrat Jagdeo so that a new Chairman can be appointed without delay.

Regarding the no-confidence motion, the AFC believes that following the final determination of the courts, elections should be held in keeping with the Article 106 (7) of the Constitution and that GECOM, under a new Chairman, should advise on the earliest date for such an election.