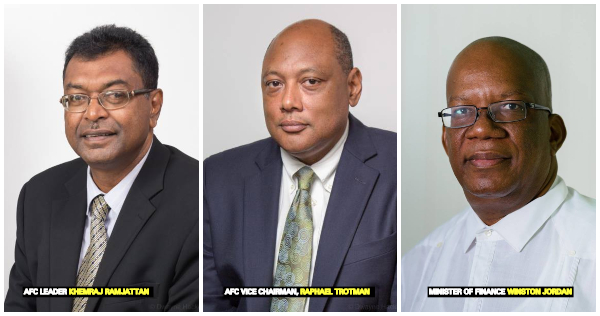 Even though the Caribbean Court of Justice (CCJ) has said that the APNU+AFC Government is in caretaker mode and efforts are still being made to rectify issues on the holding of early elections, the Alliance For Change (AFC) sees nothing wrong with Finance Minister Winston Jordan beginning preparations for Budget 2020.

Making this announcement this morning to the media was AFC Leader, Khemraj Ramjattan, and AFC Chairman, Raphael Trotman.

Even though the Political Opposition would have expressed concerns, Trotman told members of the media that the budget process is not a political process or issue. He stressed that it is mandated by the Fiscal Management and Accountability Act (FMAA) 2003 as well as the Constitution.

So whether general and regional elections are coming or not, Trotman emphasised that the process must start. The AFC Chairman also reminded that the Finance Minister has a duty to see the process through. “So there is nothing improper about that despite pronouncement by any court. It is mandated by the law and the law also sets a date on when the budget is to be presented,” added Trotman.

As for Ramjattan, the AFC Leader said that the fact remains that there should be no vacuum in governance. He said that whether the budget will be presented in November is one that will be determined when the time comes. However, all other statutory functions will have to be performed. “It would be a dereliction of duty by the ministers if we do not start the process,” the AFC Leader stated.

Earlier today, Minister Jordan launched the budget 2020 sensitisation and training process at the Arthur Chung Convention Centre. There, the economist made it pellucid that the Constitution does not provide for a caretaker government, that Parliament has not been dissolved, and it is therefore still in session.