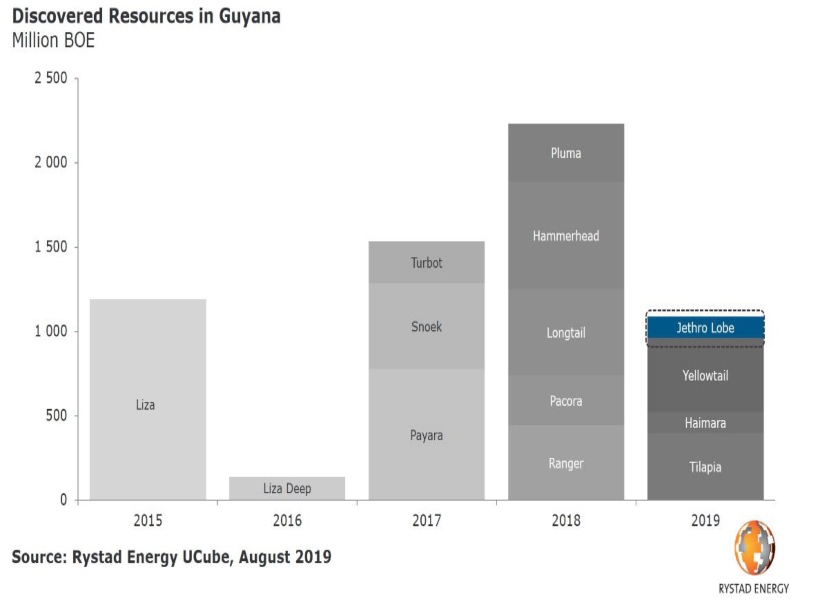 Rystad Energy, an independent energy research and business intelligence company, is of the firm view that the Orinduik Block could very well be holding billions of barrels of oil.

The firm’s assessment in this regard follows the recent announcement by Orinduik partners Tullow Oil, Eco Atlantic, and Total, that a first discovery was made at the Jehtro-1 well.

Specifically, Rystad Energy Exploration Analyst Palzor Shenga said that this well was actually listed as one of the wells to watch in Rystad Energy’s list of high impact wells for 2019.

Shenga said, “After dominating the list of major offshore discoveries in 2018, Guyana has extended its winning streak. With multiple prospects identified, Tullow and its partners could easily be sitting on a multibillion barrel block. This discovery holds not only a significant impact for the prospects identified within the block but also for future Guyanese exploration, and cements the extension of a petroleum system beyond the game-changing Stabroek block.”

The analyst noted that another well in the area – Joe-1 – is planned to be spud later this month, targeting around 150 million barrels of gross prospective resources.

The Rystad official noted that the discovery also comes as good news for other operators with near term exploration drilling.

The analyst further stated that Repsol will drill its Carapa-1 well on the Kanuku block, targeting some 200 million barrels; later this year and CGX will spud its first well in its Corentyne block by the end of the year.

“Tullow is a partner in the Kanuku block and its knowledge will be extremely helpful on the Carapa-1 well, as the company was able to complete an extremely cost-efficient drilling operation at Jethro-1,” Shenga said.