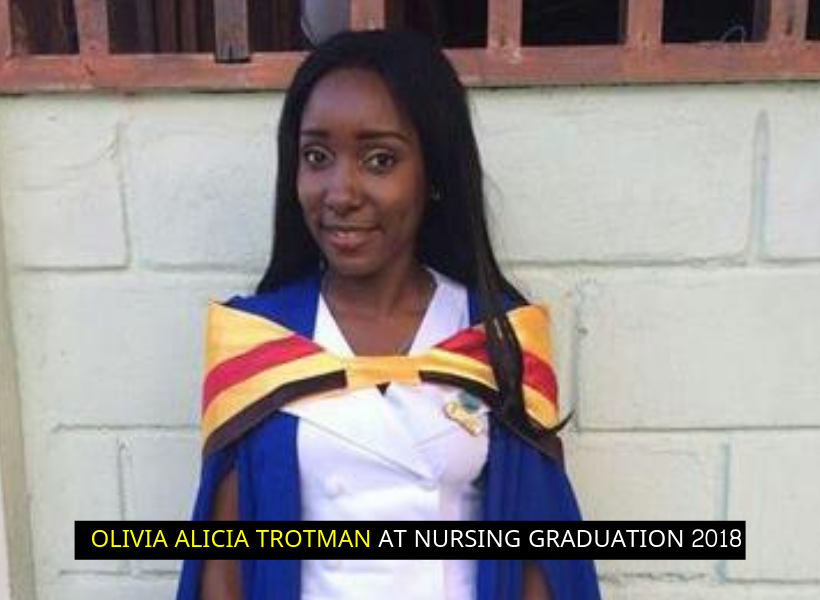 Ever so often one would hear people complaining of how difficult a nurse’s job. There are often criticisms about the conditions nurses are required to work under as well as their small remuneration.

However, despite these conditions, Nurse Olivia Trotman remains dedicated to not only the profession but to her patients who count on her everyday.

The 23-year-old was named valedictorian when the Charles Roza School of Nursing (CRSON) in Linden held its graduation last year.

Trotman has since been assigned to perform duties at the Linden Hospital Complex (LHC) in the Operating Theatre.

After a productive and satisfactory stint at the OperatingTheatre, Trotman was called for by the Chief Nurse who requested that she be sent to perform duties at the Suddie Public Hospital, Essequibo for a period of one year.

Trotman, who always wears a smile, began her new journey at the hospital on July 31 of this year.

While performing duties at work Trotman’s mother, Sonia Williams, told her that the Guyana People’s Militia (GPM) was recruiting persons for reserve. The mother also suggested that Trotman and her younger brother, Emanuel Trotman, get enlisted.

At first, Trotman was hesitant since she was of the view that it would be difficult to be the best nurse that she can be and take part in the GPM training.

However, in February she heard there was a career fair at the Anna Regina Centre Ground and decided to visit.

During the visit she met with some of the organisers who were at the time trying to restart the GPM program along with the school of cadet programme on the Essequibo Coast.

The GPM provides military and discipline skills, touring the country. The Militia’s initial role, therefore, is to provide a framework on which mass preparation for emergencies could be carried out during a period of rising tensions; to support the regular force in all of its functions when called upon to do so; and to provide a reservoir of trained recruits for the regular force.

The Militia constituted a corps of citizens who volunteered to be trained in their spare time so that, in an emergency, they could be called up to perform military service.

Pleased with what she learnt, Trotman uplifted an application form. Her mother, who she said is her biggest supporter, convinced her that she could manage both careers.

After thinking for a while, Trotman filled out the application and submitted it; she was contacted shortly to start her new career and was accepted on April 14.

According to her, “I decided to take this opportunity since I cannot advance in any other nursing field until I finish my five-year contract with the government.”

She was required to attend training on Mondays, Wednesdays, and Fridays from 16:00hrs to 18:00hrs.

“At first I was puzzled as to how I will get to work as a nurse and be able to take part in my training all the way in Anna Regina.”

She raised her concerns with her matron who suggested that she worked the 07:00 hrs to 15:00 hrs shift or alternately have her days off set on the days she is required to attend GPM training.

“It was challenging to leave work at 15:00 hrs and with little time to prepare, plus the long time spent on waiting on transportation.” However, she said, with the help of God and her support team she was determined to succeed.

She added, “Many times work got so busy which caused me to leave late but I still went to training and blended into the activities.”

As if this were not challenging enough, Trotman also had to deal with naysayers who were not supportive of women joining the militia. But their negativity did not stop her quest.

According to the nurse, “I went with the intention of experiencing things for myself and persons will only respect and treat you the way you carry yourself…I did not encounter any harassment or scandals while in training; professionalism was in check.”

In early June, Trotman did a first aid presentation to a reservist group after which she was asked by the Sergeant to do another presentation to the cadets at Cotton Field School.

She was later invited to be part of the medical team for Guyana’s National Cadet Corps School at the above mentioned for approximately 10 days. This was just the beginning of great things to come.

Shortly after that, letters were sent to the Regional Health Officer and the Hospital seeking her release for her to attend the Cadet exercise.

On completion, Trotman was the only person from her group to be promoted with “Authority/Authorised to wear” Corporal which is temporary until the official ceremony in December.

While Trotman admitted that the training and her nursing career were very challenging, she said she maintained a balance and have no regrets.

Her future goals is to acquire a degree in nursing and specialise in either paediatric/ geriatric/emergency unit.

“If given a scholarship to further my studies in the medical field [medicine] I would be overwhelmed,” the young woman said.

As it relates to the army, she expressed, “I would like to join the Reserve Officers course which I think would provide more opportunities and exposure for me to elevate myself and be an example to other young people and persons in general. And to prove that you can do anything they set their mind to with the help of God.”

She also noted that the Ministry of Public Health needs to do more for their nurses in terms of allowances, opportunities to specialise, and duty free vehicles, among other provisions.

She added more nurses are moving away from the profession because the representation is lacking.

“I love being a nurse but being a nurse is not enough in Guyana; you have to have another job whether part time in order to get the bills paid.”

Despite her hectic careers, Trotman was awarded outstanding performance 2018-2019 in May during Nurses Week activities at The Suddie Public Hospital.