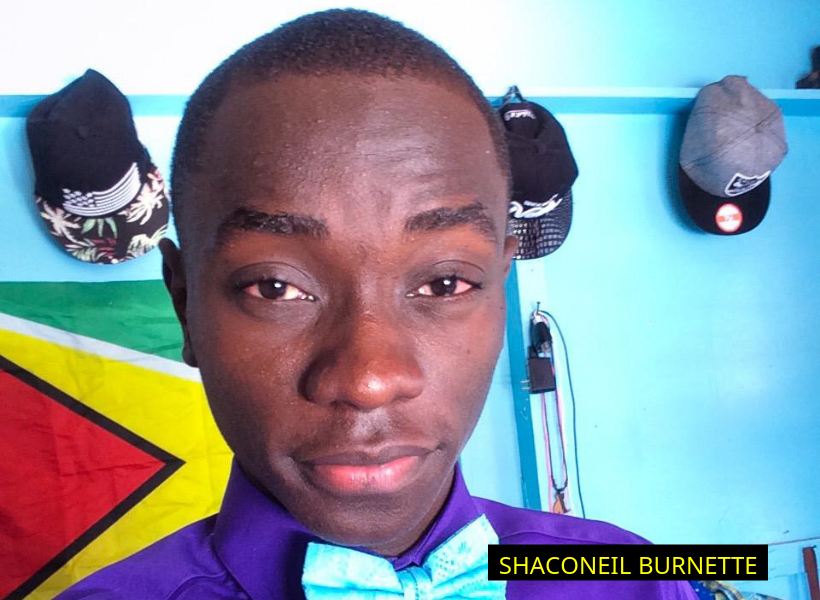 To become a doctor or a lawyer is no longer the only aspiration of youths these days. While the two professions hold as much weight as they did decades ago, the aspirations of youths as it relates to their career choices are beginning to diversify.

More often than before, youths are getting into the agricultural industry, entrepreneurship, photography and other out of the box fields. Twenty-one-year-old Shaconeil Burnette is an example of someone who decided to take up photography.

“To be successful you must have the ability to bounce back,” Burnette said, as he explained why he was determined to follow his dreams.

He has never been afraid to take risks nor has he been afraid of failure. He attributed these traits to his upbringing.

Like most teens, Burnette wanted a job where he could make his own money so, after completing secondary school in 2015, Burnette began working at Qualfon Guyana, just a few villages away from his home in Beterverwagting. There, he acquire the skill of a customer representative.

After a year and two months, Burnette left and began working at the Providence branch where he was trained to work with emails.

His outlook on life changed one day while he was having lunch with Dodi Comacho, one of  his close friends. An object that was perfectly planted next to the fence in the Promenade Gardens caught his eyes.

Burnette immediately took out his cellphone and took a photograph of what he describes as a beautiful flower. He was fascinated by the color and detail.

He then decided to download an editing app on his phone and he begin his editing process. Being amazed of the results, he showed his friend who was also amazed by the photograph.

As time progressed, Burnette developed an eye for nature, art and creativity.

All the while, he never took photography seriously until he was introduced to Qualfon Education, a learning program that offers online courses.

Taking advantage of the opportunity offered, Burnette took up the offer to enhance his photography skills with the use of a learning platform called Lynda.com/LinkedIn learning.

He acquired a great amount of skills and even gained a certificate for completing the course.

After doing nature photography with a mobile device for about six months, Burnette realised he had to upgrade to something bigger and better.

He also had friends in the photography field who helped him with acquiring a more affordable camera. From there, he began practising to shoot silhouettes and close ups of flower.

On his day off he would normally go on nature walks and tours around Georgetown, taking random photos of flowers, old buildings, and folks walking around the city.

As a beginner, he was a shy young man and was afraid to take risks in taking certain photos because of not being confident enough in what he does.

But he pushed himself, taking time to refresh his mind with his manuals, and he soon grew more confident. His confidence saw him taking a portrait photo of a female friend of his and eventually he earned a gig as the photographer at the Ms Guyana Princess Pageant 2018 where he covered the event for Nelsion Nurse, one of the fashion designers. Birthday parties, and random photoshoots were also done by the young lad.

However, as months went by, he began to feel trapped, stuck in a call center doing emails and no photography gigs coming by. Each day he would look at cameras on Amazon, feeling excited and motivated and hoping to purchase one to produce better portrait photos.

Then finally, he saw a vacancy for a photographer with a local news company. He excitedly applied for the job and was able to get an interview. However, months went by with no word from the company and his hopes and excitement waned. He practised his training and photography for a bit but then he soon began to ease with the photography work.

Then suddenly, in March 2019, he received a call where he was asked if he’s still interested in the photography work. Lost for words, he quickly answered in the affirmative and was told to start on the soonest Monday.

Now, Burnette works for the Guyana Times newspaper as a photojournalist. Having no idea or clue about media photography, he was guided by his supervisor Dexter Ceres who gave him tips and ideas about the media aspect of the photography.

Having being advised that he needs a high end camera, Burnette was able to purchase a new camera that aided him in getting his job done correctly. Getting to travel to different places, meeting new people, and interacting with other photographers were all motivations to the young lad.

He shared that he gains ideas, inspiration, and motivation from simply look at other photographers work. His greatest inspiration was Ben Long, an award wining photographer and senior editor at Macworld magazine. Ben long taught the lad everything about nature photography on his online course Lynda.com.

A few other photographers Burnette admires are Marceano Narine and Ian DeFreitas.

Meanwhile, he continues to expand his craft and began doing fashion shows, proms, and pageants. Earning an income, he was able to purchase new gears and equipment to pursue his career in photography.

He shared that he faced the challenge of feeling intimidated by other photographers who have more upgraded gears and equipment. Nonetheless, he reminded himself that a poor workman blames his tool and he started to interact and make friends and received more tips and tricks to improve his photos.

To this day, he continues to practise and learn things within the field, hoping that he’ll be able to shoot with his motivators one day.