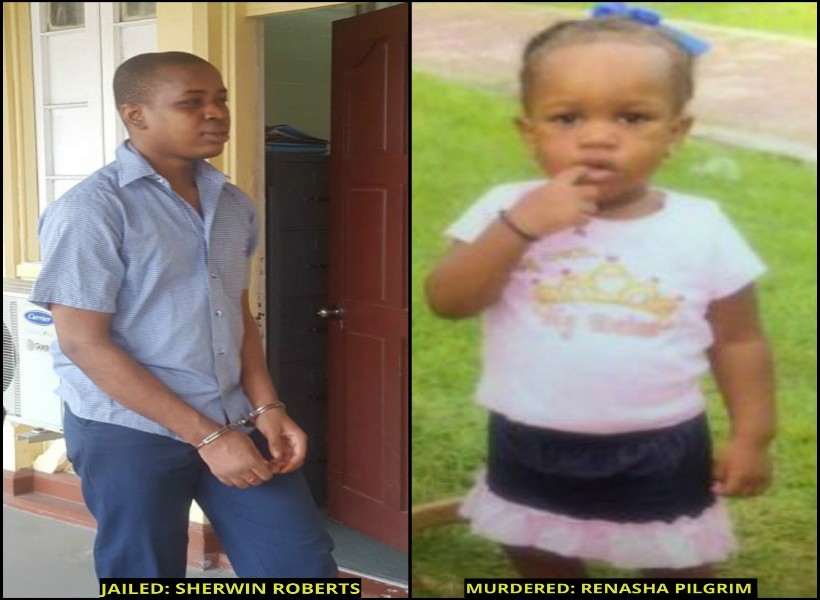 18-year-old Sherwin Roberts was this morning handed a life sentence after he pleaded guilty to murdering his one-year-old niece, Renasha Pilgrim. At the opening of the October session of the Demerara Criminal assizes this morning, Roberts was arraigned before Justice Jo-Ann Barlow.

Roberts, also known as ” Big Head”, admitted that on September 1, 2017, he murdered Pilgrim at B Field Sophia, Greater, Georgetown. He was sentenced to life imprisonment with the possibility of parole after serving 20 years imprisonment.

According to facts presented by State Prosecutor Sarah Martin, Roberts broke into the child’s home where she was staying with three minors and snatched her chain from her neck.

The toddler began to cry to the annoyance of Roberts who threw her out of a window and into a swampy area where he buried her alive under mud. The prosecutor revealed that the child’s cause of death was given as asphyxiation.

Robert’s lawyer, Maxwell McKay told the court that his client has shown remorse for his actions.

However, Justice Barlow noted that the aggravating circumstances, in this case, was overwhelming.

In fact, she said that had Roberts been convicted by a jury for the offence she would have sentenced him to life imprisonment with the possibility of parole after serving 30 years. Asked by Justice Barlow as to why he killed the child, Roberts replied, “I was angry with myself so I took it out on her.”

While Roberts indicated that he was 18, police records show that he was born on April 1, 1997, which would make him 22 years of age. During his court hearing, Roberts wore a bright smile on his face which led the Judge to inquire if he was okay. The judge then presumed that he was nervous to be in court.

She nevertheless ordered that he undergoes further anger management classes while incarcerated.