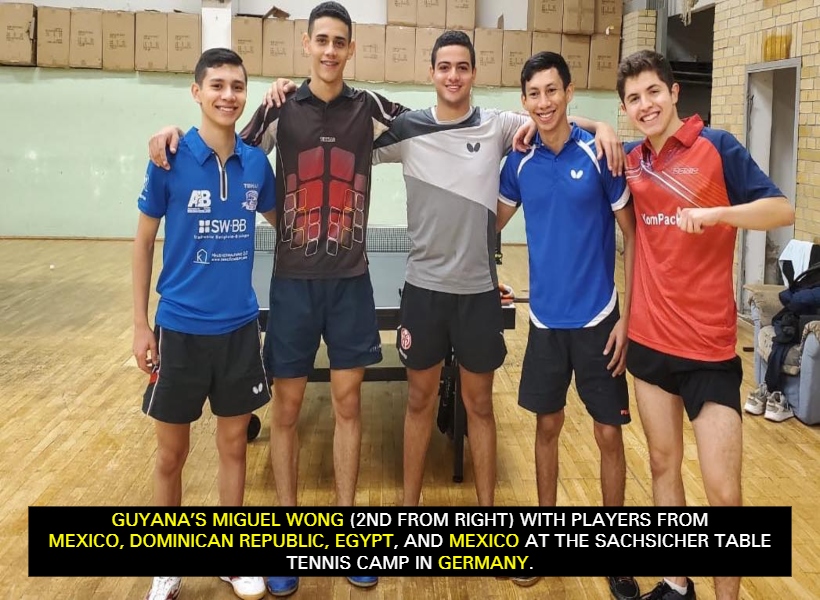 Long considered one of Guyana’s most prolific young table tennis talents, 18-year-old Miguel Wong is ‘making hay while the sun shines’ in Germany at a high-performance training camp which is being facilitated by the Sachsicher Table Tennis Club in the city of Eilenburg.

During an exclusive interview, Wong spoke of his experience thus far, a little over two weeks into the camp which ends on November 30.

He said that one of the most outstanding factors of the camp is that it facilitates his exposure to a lot of higher-level players.

Wong explaiend, “We train in pairs and we rotate constantly, I’ve gotten the privilege to train with world-class players from Egypt, Russia, Columbia, Mexico, Romania, Morocco, India, and Poland. Occasionally other players stop by the club to train before their league matches here in Germany.”

Touching briefly on his acclimatisation, Wong pointed out, “Everything here is more technical and is more about spin placement than speed and power, something that the coaches explained will come later. I am still getting used to the climate and weather conditions as it’s coming into winter.”

Quizzed about the coaches’ assessment of his technique, Wong highlighted; “My footwork and (physical) conditioning is fine, however, there are minor flaws in my backhand top/counter spin technique which we are currently working on”.

“I’m working with a coach from Romania, Andras Turoczy who plays with the Romanian National team and I can already attest to improvements in my game” the outspoken Wong revealed.

Looking ahead, the youngster has his sights set on playing in the German League.
Wong noted; “After over 8 years of training in Guyana, my talent is finally being recognized overseas as options on playing for clubs in the League Matches here in Germany have already been suggested to me. Nothing is confirmed yet but most likely hopefully next season in the new year I’ll be able to play in the German League matches”.

The ever-humble Wong was also quick to express his gratitude to his sponsors who played a major part in getting him to Germany.
“I’m really grateful to Ready Mix Concrete, Kings Jewelry, Beacon Cafe, Power Producers& Distributors Inc, Demerara Bakery, Payless Variety Store and the parents and members of the Titans Table Tennis Club back home in Guyana”